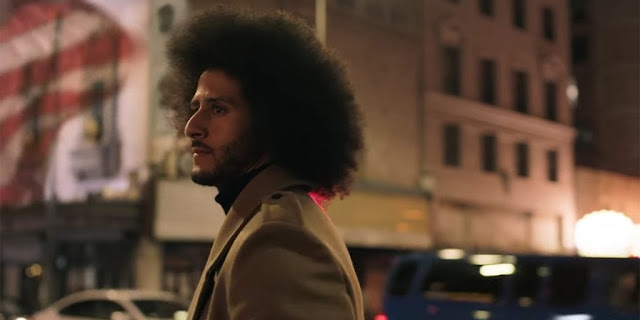 So in shocking fashion, the juggernaut that is Nike has now backed Colin Kaepernick and all that is, was, and has become, in this on-going dilemma. And of course, has now added a new layer to it all.

Interestingly enough, the company fully supports Kap, and has centered the 30th Anniversary of it's "Just Do It" campaign around him, continuing a clear divide of idealism and ridiculousness across the country. And shall I say, even more absurd rhetoric on defining patriotism in the good ol' United States of America.

First things, first. If you're new to this blog, I'll catch you up to speed on my stance - I've been with Kap. And no, I'm not "anti-American". But I'm pretty sure you will jump to conclusions and tell me that I am.

Second, I keep writing and saying that I'm done pondering on this situation, yet, here I am again, punching the keys of my laptop on the very same evolving situation. Because every step of the way as been a slight dichotomy of social issues in this country.

Regardless, here we are in another chapter and I still can't completely grasp the resistance and strong-headedness in the entire situation. Again, it's very simple. It really, really is. Kap took a knee to protest and bring light to the injustice and inequality in America we see, live, and experience everyday. Period. That's it.

The protest in fact, was suggested to him by a former member of our military who has served. So again, no it's not a plight on the military or the country.

As history has dictated time and time again, the many who have brought these issues to the nation's dinner table, making many (mostly white people) uncomfortable with the topic, use the time old narrative based on patriotism and defense thereof, and flags codes, or whatever.

So again, this is the part that makes me keep coming back. Because quite frankly, this is simple. Go figure. And for the many who continue to deflect, defer, or attempt to throw stars and stripes daggers, I ask this question I've done so many times to those who have embraced with myself a civil debate on the matter:

Why is it, when certain groups of people in this country continue to tell you about their unjust experiences as Americans in this country - for years, decades, centuries - do we not simply listen?

And quite honestly, again, for me, that's what this comes down to. My life, because of my brown skin, is not more important than "standing for a song" in this country? 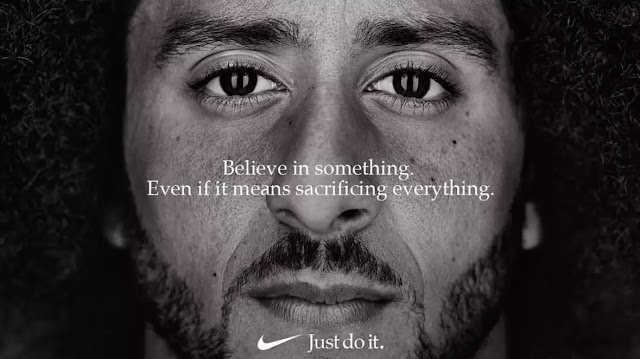 As for Nike, I applaud the company. I really do. No other company of such status has done more to embrace the social justice scene than them. At the same time, just like my brief ponder above - equality always wins. It does. It comes out on top no matter what the situation is. So, again, kudos for Nike for taking this stand.

Of course, I'm not naive, and we all no how companies make decisions. For one, everything is always political when it gets to the board room. It's what we see in the NFL and their owners fumbling and mishandling this situation every step of the way as they attempt to cater to the President.

The right thing from jumpstreet would have been to say to the players - OK, how can we help you bring light to this topic - but, we're gonna need you to stop kneeling. Let's do this together.

So, for Nike to outright take this stand, there is definitely some gutsy people in those board rooms, and even more so, with moral judgement beyond ties to a political party, who can look pass lobbying dollar signs, blindly backing a socially inept President, or at the very least, is able to reach out on the issue.

TARGET DEMO - JUST DO IT

One thing I will openly admit - Nike isn't stupid. Maybe Nike isn't all that interested in being socially active and on the front lines of such a battle. One thing is for sure, they are well aware of who their target demographic is.

Many of their biggest clients are indeed athletes of color. Let's call it like it is, black culture dictates plenty of what is cool in American mainstream culture. From music, pop culture, dancing, language, sports - it starts there. And Nike knows that.

Disagree with me? Fine. Name me a white athlete that endorses a shoe line that is popular? Tom Brady, probably the biggest and most mainstream white athlete of today that I can think, and yet, no air Bradys, signature endorsements, or popular line. He doesn't carry the cache of a Kyrie Irving or a LeBron James - two of Nike's biggest endorsers, and highest selling shoe lines.

All you need to do is take a walk into any predominantly white neighborhood, and take a look at the feet of your neighborhood white kids to see what line they are wearing. Black culture leads that. It's why appropriation has been such an issue - America loves black culture for it's worth, not the bodies and minds behind it.

In know...jut bloggin'. You might think I'm either crazy, or speaking heavy truth...but I'm putting it out there.

Nike is totally aware of where it's bread is buttered. They took a chance on a guy named Michael Jordan in the 80's, and he, did so with them. It's fair to say that's worked out, and since then, they've never looked back.

So yes, when the white middle-aged baby boomer dad is on Twitter cutting off the logos on his socks, or burning his all-white Nike's on his lawn the truth is: 1) It's ridiculous to burn already bought apparel, just stop it, and 2) you are NOT that big of a concern to Nike's business.

Even with a trending #boycottNike and growing discontent, a recent 31% in sales are just proof of that.

Even as the NFL season begins this week, what is continuously hidden behind this story is the recent ruling handed down in the case of Kap and the NFL, in which the NFL's motion to dismiss collusion allegations has been denied. It's a ruling that is very rarely seen in similar cases, and of course, proves that there is legit and strong evidence of such collusion by the league.

Obviously, this isn't the last chapter...

1st DOWN & HYPOCRITICAL TO GO

And finally, I've already given up on the NFL, and really, football in general. The Kaepernick situation is just a mere element, but for me, the clear links to CTE and the NFL's continued deflection (what else is new?) of the damaging evidence is very much why.

However, as we enter yet another NFL season, I'm extremely curious to see how many people - for whichever side of the fence they come down on when it comes to this issue - will continue to support the NFL?

One of the biggest conflicts in this for many is just that - separating the culture of football and Americana, and being conflicted in the allegiance to it all.

With all of that said, I won't even attempt to say this is the end of my take on the topic. However, it always will remain a simple one - how can we solve these inequalities in our country?

But until then, this is where we are.

Welcome to the battle, Nike. Settle in. It's a long fight.