Some Hard Truth on End of 2018 Yankee Season 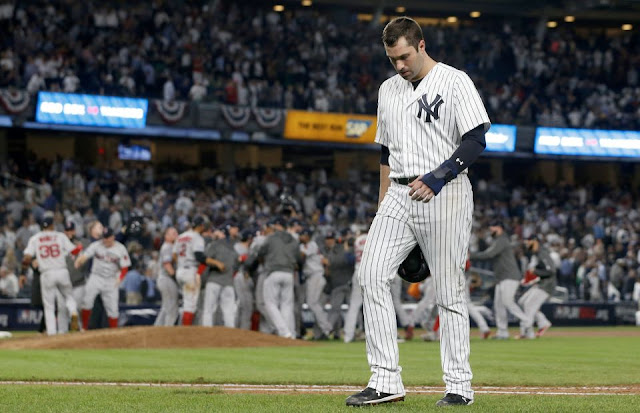 As the ball hit the back of Steve Pearce's glove, and the final out of the Yankees season came to an end, I found myself slumped on my couch with my son in tow next to me - dejected. Not irate, but flat out disappointed. It felt like conquering the Red Sox was goal #1 this season, with winning a World Series just behind it. I'll explain in a few...

Nonetheless, as goes the deal today in sports, I opened Twitter (huge mistake!) to find opinions, rants, and absurd raging remarks filled with the usual over-the-top hyperbole and dramatic perspectives on the Yankees season. Sometimes, I want to chalk it up to passion, pain, and the need to simply grieve the moment at hand, but as always, it was all pure lunacy.

Regardless of the immediate reactions and takes, I found myself in a sunken state, almost in a weird mode of reflection. For starters, here is something most Yankees fans don't want to say among the midst of their lashing out at Giancarlo Stanton, or their Fire Boone demands - The Boston Red Sox were a better team. That's it. That's all there was to it.

You know what else no Yankee fan wants to admit? Despite an awesome 100-win team that just set the record for most home runs in a single-season, we've been jealous of the Red Sox all year. Unlike last year's squad which felt like an underdog thrill ride in the first year of a "rebuild", this year just had a bridesmaid-like feeling hovering over it from April until tonight.

But even in saying that, I find myself looking towards the 2019 season and what next year could be. Then another fun anecdote hit me - this year marks nine years since I've last experienced a Yankees World Series champions - which ties the longest drought without a Yankees title in my lifetime. Seriously, think about that? IN. MY. LIFETIME!

The mark ties the drought between the 2000 World Series victory and the 2009 World Series. And because it bookends titles, you can make the argument that this is now THE longest drought.

As I stared at my son after the final out, and hoped that someday we can celebrate together, take in a parade down the Canyon of Heroes, and forever lock in specific names on those title teams in our hearts - I find myself in this mode of wondering if THIS stretch is as bad as it has ever been for my baseball fandom. And if it is, being upset about a 100-win season further heightens the spoils of my baseball fandom.

Then again, there is my love for the New York Knicks which keeps me grounded. Many thanks, Jimmy Dolan.

So, am I taking the high road tonight? Yes. It just helps me put in perspective some of that same lunacy I've seen on Twitter; read from friend's texts; discussed with others; and ultimately, will eventually see become mainstream talking points, because you know - that's sports these days.

With that said, I'm going to quickly breeze through some quick thoughts on said lunacy and hysteria: 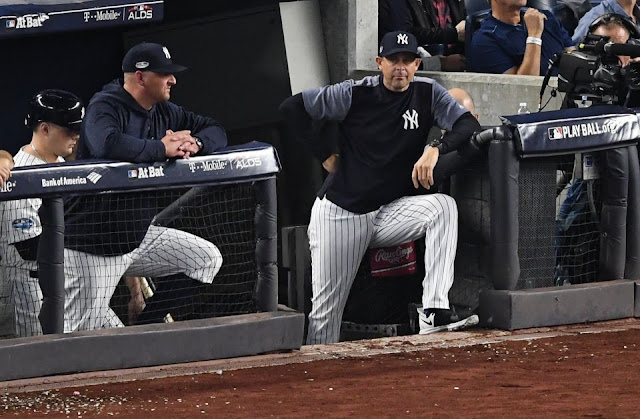 - First, calm down with the "Fire Boone" nonsense. Nothing drives me more crazy than fans who want to attach failure to perform to the hypothetical decision-making scenarios. Were there some interesting decisions? Absolutely! Most notably the decision in Game 3 NOT to pull an obviously struggling Severino after the 3rd inning and also the decision to go to Lance Lynn in a bases loaded-no-outs scenario rather than give the ball to your ace reliever and high-strikeout rate guy in Dellin Betances.

And there was game four when he stayed too long with CC Sabathia. Quite frankly, Boone was out-managed by Cora, especially considering the lack of artillery in the pen for the Sox.

With that said, I'm just not sure firing a manager is the right move here. You need some consistency moving forward with this group - still a very young core might I add - and not allowing a first-year manager with a 100-win season to redeem himself is rather quick-triggered. Boone has to be better next year, no doubt about it. But allowing his return definitely gives him a chance to.

- Second point on Boone - look no further than starting pitching performance, and well, the ability to hit with runners in scoring position that gave away this series. The Sox just dominated both categories. Again, Boone was questionable - at times awful - but, not much you can do when you can't score and your starters are getting you through a third of the game.

Here is a funky little stat for the series:

- In another note of interesting narratives - how come no one ever mentions the fact that the Red Sox have the highest payroll in all of baseball? By like, a lot. Remember when that was a constant rally cry going the other way in this rivalry? Especially, among other fanbases in baseball. Baseball needs a salary cap!! Whatevs, I guess. 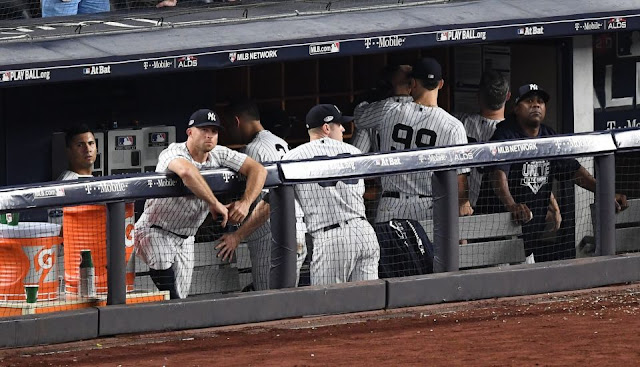 - And finally, the window is just opening for this team. Believe it or not, this is very true. I'm not sure if they add big prizes like Manny Machado or Bryce Harper in the off-season, or address the leaky rotation with a guy like Patrick Corbin, but this team is poised for good things ahead with a young talented team, and new disposable funds to spend - goodbye luxury tax!

Although, it might be the last time we see Brett Gardner in pinstripes. Super sad.  :(

Nonetheless, tonight is hard to take because we were dominated, and done so by the Red Sox. And while it's not 2004 (nothing ever will be that bad), it sucks. It absolutely sucks.

So rant. Rave. State your lunacy. Even call for a firing or two for the sake of sports "talk" and over-the-top-conjecture. But honestly, Yankees fans - we've been obsessed with the Sox all year, and I don't think we - collectively as a fan base - EVER - enjoyed this season.

And that is truth we don't want to admit.