Kavanaugh Confirmed - Not Shocked At All 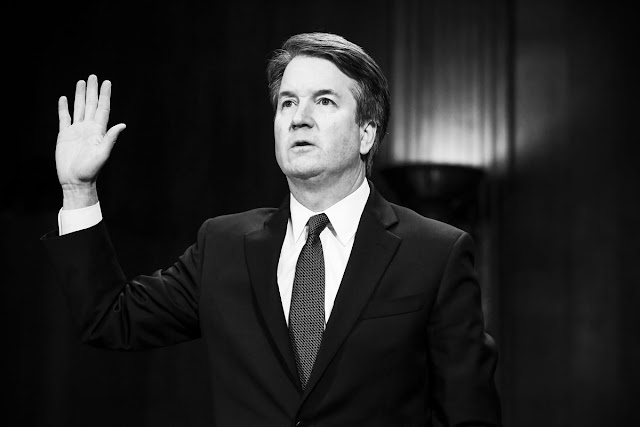 I'm not shocked at all that Brett Kavanaugh was sworn in as a Supreme Court Justice.

Not shocked in the least.

I wasn't exactly rooting for him to be removed, or even wishing for his entire career to be thrown down the hatch due to the recent state of events - that would be unwarranted and cruel. After all, one could argue that regardless of what happens moving forward, Brett Kavanaugh will always have everything - EVERYTHING - that happened in late 2018 hovering over his career.

However, what I find discomfort in, as many do - well, I guess depending on your party affiliation and/or strength of commitment to said party and overall belief - is the overwhelming reaction and outlook by Washington on the situation.

After Dr. Christine Blasey Ford's testimony, it was clear to me that she was believable, and in many ways credible. And on the contrary, Judge Kavanaugh, a man who is supposed to exude temperament, poise, high decision-making attributes, and so much more,  was defensive and outright confrontational throughout the process. One the very basic of elementary human levels when it comes to conflict - that was a red flag.

Personally, the moment Judge Kavanaugh refused to answer the question on whether he would consent to an FBI investigation, was the moment he lost me. He definitely did. And no, I don't believe the brief investigation done was adequate. Just my opinion. There were two other women who also were not heard, and possibly, will never be. That in itself is a disservice to the seat, and of course, to the women who were not heard. This is especially concerning in the times we are in in discovering the actions of men in power.

The investigation felt like rudimentary protocol, an annoyance of some sort, for the government. There are background checks to get an apartment in NYC that take longer than the said "FBI Investigation".

And no, I also don't buy this as "High School behavior". That privileged narrative isn't given to young people of color in many scenarios that border the law.

And yes, I do believe people can change. And maybe Kavanaugh did. But he's still responsible for those various actions in High School and College. Good works doesn't shift the balance - forgiveness /acknowledgement does.

But despite the obvious, what we have here is the same ole, same ole in America - the privilege of the the straight, white male, and of course, the upheld of said culture.

As a person of color, no, this outcome didn't surprise me. We've seen it from the beginning of time when it comes to "the benefit of the doubt". Marginalized people in this country expect this. It's the way the system is in fact set up.

And as a man, I find myself even more so in reflection and conviction of how my actions, my thoughts, and my silence (imagine, that?) contributes to this standard. Oppression comes in all types, and I can't even imagine what it is like to be a woman in America in 2018. Especially, after this entire ordeal.

If Dr. Ford, a credible woman with details and so many accounts that warranted scream for investigation on her sexual assault, and was not given a fair process for justice, why would anyone else feel the need to come forward?

Unlike the media coverage, for me, it's not about Trump - that's too easy. Because, we've fallen down this rabbit hole of ALWAYS blaming Trump.

No. This is about culture, privilege, and power.

And with that, is why politics and the claims of affirmation, regardless of Ford's testimony, were so prominent from the senate within this vote. Because it didn't matter what the situation or ethical dilemma at hand was - preserving politics, power, and privilege was at hand, and it had to be secured.

Because, 'Merica, right? And MAGA, and all of those suppressive, fear-mongering, sayings that get people going who are so afraid of moving away from the way things used to be. Because you know, the past was absolutely delightful for all.

So no, I wasn't surprised. I've seen this far too often from the lens of a person of color.

Tell me - convince me! Why else would I expect anything different?