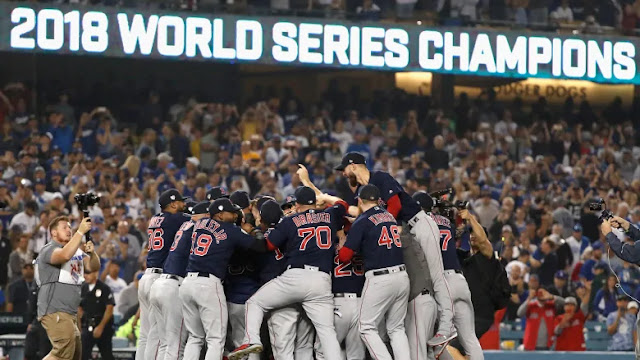 1. Boston Red Sox - As much as it pains me to say this (and it very much does), the Red Sox take the top spot this week. Even further (and hurting my soul even more), they might have been the best team I've seen in my lifetime since the 1998 Yankees. Congrats to the city of Boston on (another?!?!) sports title. Ugh.

2. Roman Reigns - The news of Roman Reigns announcement that he was battling leukemia was devastating - just another case of you don't know what's going on in someone else's life. It's surreal to me personally, as I share a birthday and am the same age as someone like Reigns. Life can come at you fast, and be very cruel, no matter how hard you work. However, The Big Dog gets the "Up" here for sharing the news so publicly, including his testimony of fighting it since the age of 12. And really, the dude seemed to be taking it stronger than everyone around him - including all of us, fans. Get well soon, Roman!

1. Pittsburgh Synagogue Shooting - What a hateful week. What is beginning to scare me is the "if-we-had-armed-forces" argument for all of this incidents becoming the soluble narrative. Where is the end on this culture for all of us? Also, as always, this is terrorism - let's call it what it is.

2. Serial Pipe Bonber -More hate. More nonsense. All of the Trump stuff aside, how crazy is the world right now when the political adversaries of YOUR political choice are deemed worthy targets of freaking bombs? Seriously, America? Is this what we're becoming?

3. Megyn Kelly - Finally, Megyn Kelly apparently doesn't see the issue with black face. More hate. But just chalk this one up as plain stupid. What's scary to me is the amount of people who either share or defend these same thoughts. SMH.

White Privilege on Terrorism - This Tweet was so true, and so amazing, and so funny...but mostly true. Couldn't be said any better on the privilege white men (among the many) have when it comes to what constitutes as terrorism.


terrorism is one of the only areas where white people do most of the work and get none of the credit
— Ken Cheng (@kenchengcomedy) February 16, 2018