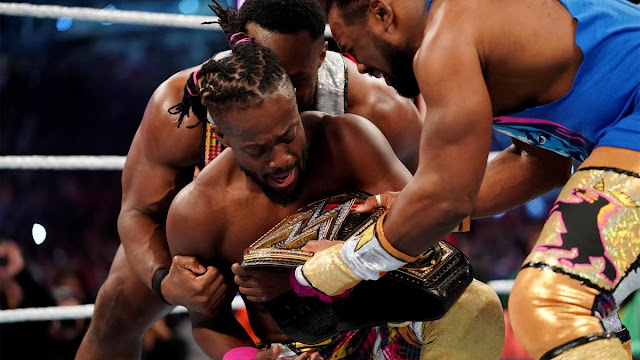 1. Wrestlemania - I still love Wrestlemania and everything that encompasses the weekend of the biggest wrestling show of the year. Unfortunately, with a little one now, I couldn't attend the event(s) here in NYC. But all of the shows - WWE related or not - over the weekend were fantastic. It wasn't a Wrestlemania I looked forward to going in, but it definitely paid off.

1A - Wrestlemania Diversity - It took awhile, but it was pretty cool to have the women main event 'Mania. Also, so much kudos to the WWE on the storyline regarding their past of black wrestlers, and using it to sky rocket Kofi Kingston. They never once mentioned race in the build up, but everyone knew what this was about. Awesome, awesome moment.

2. Spring Weather - 60 degrees temps here in NYC are becoming a normal thing! I drove around yesterday with the windows down! Yes! Yes! As always, I'm over winter.

3. Russell Westbrook - First of all, Westbrook's 20-20-20 game (for Nipsey, of course!) is a stat line that just boggles the mind. That's outright videogame-like! Then of course, he ends the season averaging a triple-double for the third straight season! Yo, one season is unheard of. He did this again! After doing it, again! Maybe it me, but Westbrook is getting overlooked here.

1. Accreditation Policy - This made my blood boil a bit. I'm in favor of For-Profit schools, as they do provide a source of higher education very much ignored by the non-profit and private/state sectors. However, rolling back accreditation policies and supervision is not the answer. There is no way to protect these schools...errr companies, from taking advantage of students, and of course, it now upsets the cart in terms of policy for the non-private sector. A mess. And of course, all about money - not education here.

2. "These are Animals" - The President said the people coming across the border are not people, but animals. SMH. Of course, this week, DHS Kirstjen Nielsen resigns. Go figure. What a mess.

3. Wrestlemania (length!) - I did not finish Wrestlemania. I started calling it a night right around the 11pm mark - by calling it a night I mean drifting asleep on my couch. Hey WWE, I know you have your own network now, but going past 11pm (which started at the Royal Rumble) is absurd. And when I woke up to the entire event starting over on my TV - it seemed it ended wayyyyyyyy past 12:30am.  I expect Wrestlemania to be two event days very soon. This can't be sustainable for long.

1. What's Country? - So Lil Nas X and Bily Ray Cyrus collaborated on a song and the country world flipped out because "it's not country". Country music and country fans need to get over it. In fact, do more outside of the genre. Just me bloggin, of course.