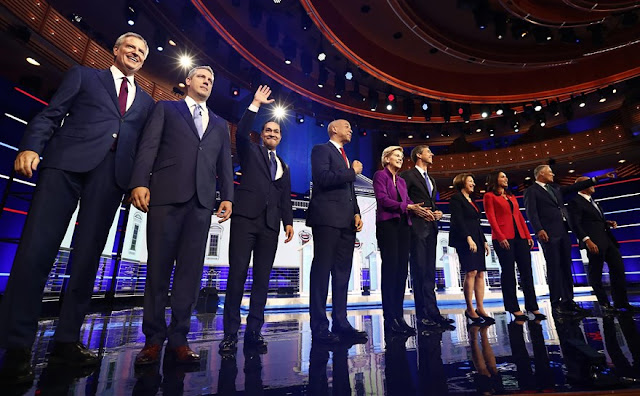 1. Brooklyn Nets - It's safe to say the Nets had a tremendous week. They landed pretty much a great haul to put them in position to make a deep playoff run next season, but they managed to do something they've been trying to do since arriving in Brooklyn, put the Knicks on the ropes, and the City on notice.

2. Adrian Wojnarowski - I honestly don't trust anything else from any other basketball "reporter". Everything leading up to NBA free agency was simply rumors and random dribble that began with "Sources tell me" from everyone else. Woj stayed quiet and then dropped countless Woj Bombs on us on Sunday evening. Kudos to him who works tirelessly.

3. Meghan Rapinoe - Rapinoe is so bad ass. Not only did she defy the White House with a pretty cool fashion, she dropped two big goals on France to get the United States into the World Cup semi-finals.

1. Dems 2020 - What a disaster these debates were. Absolute disaster. Why are some of these people even running? Who are their campaign managers telling them they have a shot? It's so hard to watch, and really, even more so because I don't doubt Trump will win another election.

2. Kamala "Not Black Enough" - It's amazing that this was a narrative that was out there and also retweeted and approved by Donald Trump Jr. Can you imagine the gaul of some white Americans - especially those in office - to pass judgement on the "blackness" of an individual? And Trump Jr of all people hopped aboard.  Is there anything this guy does that isn't an instant eye roll?

1. Alabama - If you didn't think Alabama could get anymore ridiculous in their law making and law enforcement, take a look at THIS.