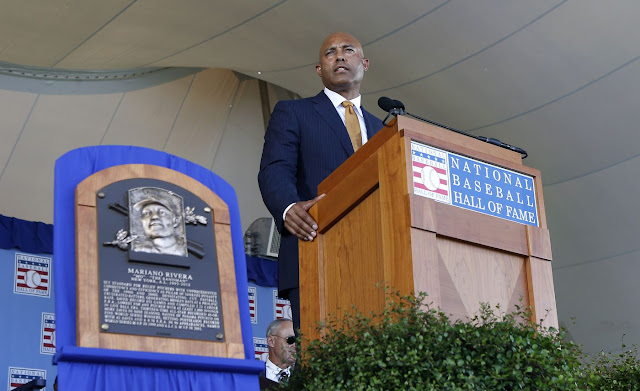 1. Mariano Rivera HOF - So yeah, this is completely biased. I'm still doing it because Mo's my guy. It was great seeing my favorite athlete of all-time give his induction speech, and of course, reminisce on an amazing career. I do miss Mo.

2. Dan LeBetard - I'm not a huge fan of the guy, but what he said about the President's words and actions were dead on. Especially, in how it plays out to ESPN. I'm not so sure if it was worth the risk for him in doing so, but he's dead on that the actions of the President were based on race, not politics, and there needs to be a stand taken.

3. Zlatan Ibrahimovic Goal vs. LAFC - If you missed this rivalry match in the MLS, you missed quite a bit. But THIS goal from Zlatan was everything you need to know about this rivalry - physical, yet, amazing.

1. "Send Her Back" - Utter shameful. Completely disgusting. I held Charlottesville and his refusal to denounce white nationalism in an unfortunately encounter back in 2017. THIS now takes the throne. Same goes to those who chanted such disgusting rhetoric.

1A. "Send Her Back" Apologists and Defenders - The only thing more disgusting than white people attempting to tell the world what "racism" is, is how this entire scenario was spun into the likes of defending America in some ridiculous "love it or leave it" scenario. Right behind that very spinning anecdote in this entire ordeal is finally, the many white Americans with European lineage who are now attempting to spin their ancestors as arriving here "legally". The whole thing is just out of control.

2. Governor Ricardo Rosello - It's one thing to be in public office and get caught doing something stupid, it's another to do something absolutely stupid that is not even necessary. Governor Rosello is under fire in Puerto Rico after leaks were discovered of him bashing Puerto Rico and pretty much saying things that well...were uncalled for.

3. Summer Temperatures - I love the summer. This - whatever this was - was absolutely brutal. Major shoutout to many New Yorkers who lost power tonight and are surviving these final hours without a fan or Air Conditioner. I can't even fathom your mental will to get through the night.