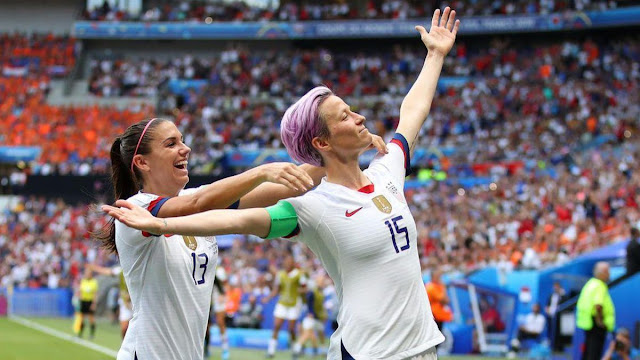 1. USWNT World Cup Champions - What can I say? This team was absolutely dominant in it's run to a historic victory. Even better, was the flair, swag, and stance the members on the team took in regards to the White House, Equal Pay, double standard in sports, and so many other issues that carried alongside their place in time and the moment. Just a remarkable game played today, and such a beautiful transition of United States Women's soccer from the current roster to the next generation. Just like 2015.

Oh an BTW, can we pay these ladies equally to men? You know, the same squad that lost the Gold Cup final to Mexico (again!). US Soccer, we need to do better.

2. Coco Gauff - Women in sports ruled the week and I loved it! Everything that is Coco Gauff has been absolutely mind boggling. A 15 year old has won two Wimbledon matches. And speaking of the transitions in the US Soccer, how cool is it to see Venus and Serena Williams inspiring a whole new generation of tennis players. And even better, tennis players of color. Coco Gauff, Naomi Osaka, Sloane Stephens, and Madison Keys - all goes to show you the importance of believability when there is a face like yours in a place you want to be.

3. Lee Iococca - Back in grad school (my first time through - that sounds weird, I know), a professor had us read excerpts from Iococca's book, Where Have All the Leaders Gone?. It was then when I learned about the brilliance of Iococca as an innovator, but mostly, as a leader. The man invented the minivan when everyone called the idea dumb! He also invented the historical Ford Mustang. A great business leader that left behind so many great lessons for leaders and managers, regardless of industry. He will be missed.

1. Immigration Centers - It's amazing the reporting and social reception around the condition of these centers at the border. The way politics - especially, identity politics and this era of Trumpism - has really done some damage to the human spirit. I don't care who visits there, or what the outlook is, many of the photos (reported on both sides of the aisle) are horrifying and illicit feelings of sadness and anger when it comes to how we as Americans have handled this. It's shameful. Absolutely, shameful.

2. Jeff Epstein - Nothing like billionaires who do dumb, petty, and privileged shit like engage in sex trafficking. It's one of the things that makes me wonder how screwed up the world is. I can't say that I'm not interested in this going forward - I very much want to see who else goes down for being wrapped up in this mess.

BTW - I won't hold my breath for any type of severe punishment (see: Robert Kraft).

3. California Earthquakes - Southern California experienced two earthquakes over the past week or so and luckily, we haven't heard or read of much damage occurring, or great loss of life from the events. The scary part is that experts are still saying that the region is due for a massive quake - in fact, they are overdue. Let's hope they are wrong.

1. Trump Parade - Look, as I've stated, I'm well passed the whole bashing Trump thing - if I ever was at any point doing so. His Presidency is what it is, and the country is in the place we experience today - divided. As I'll always say, I gave Trump a chance, and he threw it out the window on how he handled Charlottesville. That's me. But I digress...

What leads me to this SMH this week is the July 4th parade in DC. The President ordered over $2 Million to be spent for this parade that not only was rained out in many ways, had such cool "Murica" things like tanks and fly overs (note: that's sarcasm), and included a speech given with historical facts that were really rough on the edges - including a moment in which he mentioned an airport - an airport! - during the revolutionary war. SMH.

But really, is there anything more divisive on a day in which we should be celebrating our country's independence in unity than a politically driven and backed parade forcing systemic patriotism?

Here's my hot take for the year, and I don't give many of them, if at all - The USWNT did more for national pride and feeling great about country this weekend than the Trump Parade did. In fact, I don't even think it's close. Tell me I'm wrong.