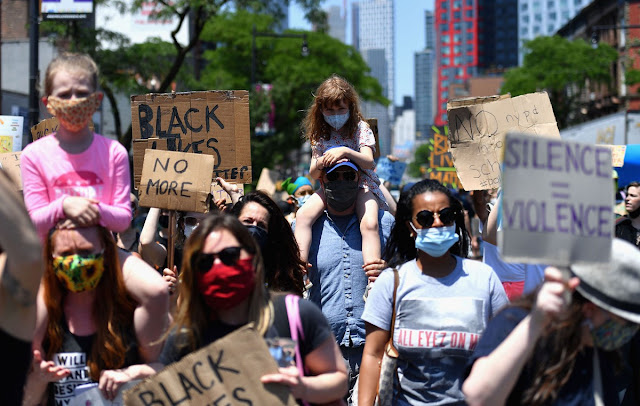 1. Confederate (and Columbus) Statue Removals - It's about damn time. It really is. I will never be able to understand the concept of our nation upholding and protecting the voices and namesakes of statues, parks, and whatever else that permeates our society, with men who turned their backs on our country. And there is also Columbus who raped, pillaged and slaughtered his way into a Western world (save me the lame defense of him, too). Then again, in doing some research, I recently found out that most of the streets here in Brooklyn are named after slaveholders - including the one I live on. My literal address is a slaveholder's name. When they say "we don't own these streets", they literally mean it.

2. Darrell Wallace Jr. - I know nothing about NASCAR. In fact, my favorite race car driver probably is Lightning McQueen - for real, though, it is. I love all three editions of Cars. Nevertheless, so much props to Wallace, the only black driver on the circuit for getting the Confederate Flag banned from all future events. We can get into a discussion of why it was allowed in the first place, but whatevs. It was also a nice touch for the sport to host a moment of silence for George Floyd. Regardless, I'm sure Wallace driving a Black Lives Matter car must also really annoy some NASCAR fans.

3. John Cena BLM Donation - Everyone knows Cena for his WWE stardom, but Cena is an absolutely good guy. From granting the most wishes ever to the Make a Wish Foundation (over 500+ - a record by far), to now donating $1M to a cause he really believes in, Cena should be recognized for standing by his words. Not many in the entertainment industry can truly say that.

2. Voter Suppression - The scenes out of Georgia of long lines - upwards of 4 hours to vote (!!!) - is absolutely depressing and upsetting. However, voter suppression has been going on for years decades. However, I really anticipate a motivated country to vote - for whomever you choose - this November. No matter what it takes.

BTW - how can our country figure out pointless ways to collect votes - such as American Idol - but we can't (or don't want to) figure out equal access for electing our officials? Let's figure this out, please.

3. Confederate Flag Defenders - The Confederacy literally lasted five years. Five. The idea of a "heritage" argument is beyond laughable. It's about racism and an ideology of "America" that some see "slipping away" or at the very least, hold on to the tentpoles of that ideology. Imagine coming out on top in two World Wars, yet placing stock in the Confederacy years? Now imagine being a black veteran coming home and still facing Confederate statues - That's America.

1. Ridiculous Dems Photo - I slammed President Trump's ridiculous photo last week, it's only right I do the same for the Dems and that head-shaking display of Kenta cloth and taking a knee. It was so incredibly corny and unnecessary. Nancy Pelosi and Chuck Schumer just seem like two individuals who just don't get it.

1. Baseball - Between the players and the owners, baseball just let an amazing opportunity pass to do something VERY special this summer. I can't say I'm not surprised.