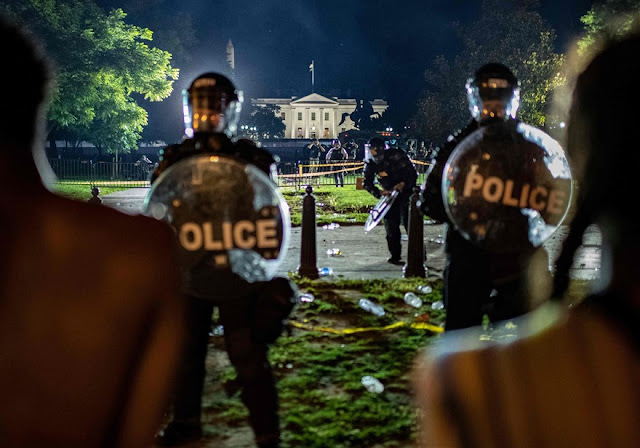 1. (Re)Education - Getting the top spot this is week is the immense education (or continued education, depending on where you're at) on social change and how our systems really work for everyone. Personally, I love it. It's been so great having these discussions, and also, now including many others who have NEVER seen the world through anything else besides a white lens. Please continue to read, to ask questions, to engage, and to yes, ponder.

2. Black Lives Matter Plaza - Yo, I had to check multiple sources to believe this. At first, I thought it was a fake ordeal. And when I realized how real it was, it definitely was a moment that caused me to understand we are really in a special time. I can't wait to get to DC to see it.

3. Maria Taylor - There were so many choices to go with this week in the "up" section. Everyone has had such great, intelligent content and rhetoric. However, there was just something so pure, so incredibly real and relatable about Maria Taylor's comments from ESPN's First Take in regards to the black experience, and of course, how we've always had to navigate white spaces. Definitely give it a listen.

1. Trump Photo-Op - The entire week I really thought the President had a tremendous opportunity to do something special, to really present a different version of himself - if just for a few minutes - to those who have vehemently opposed his Presidency. I know I've been critical, but, a well-timed, well-articulated uniting speech would've landed him a W in my standings board. Instead, police tear-gassed protesters DURING his address and he trotted over to St. Marks and proceeded to take one of the most awkward photos in the history of awkward photos for no reason at all. Instead of throwing the ball to first base for the easy out, the President fielded a ground ball, ran to the outfield, and posed for a picture awkwardly holding a Bible. That's how tremendously cringe-worthy that photo was.

2. Hypocrisy - In the midst of the discussions and the mass content out there, it was interesting to read, view, and see those who have yet to come around and have held hard to the status quo. Even more interesting, watching people like Laura Ingraham suddenly about-face on athletes in politics in defending Drew Brees, just to have Brees continue his rapidly-changing awakening throughout the week in understanding Kap's protest. No word yet from Ingraham. But this sort of stuff has been everywhere.

3. Amazon Deforestation - As if the world hasn't had enough to deal with in 2020, we now have the continued deforestation of the Amazon Forest in Brazil. While COVID-19 continues to ravage the country, President Bolsanaro has allowed continued razing of the forest. So. Incredibly. Sad.

Minnesota Law Enforcement - Besides BLM Plaza, the biggest shock to me has been the very idea that the Minnesota Police Department will be dismantled, reviewed, and replaced with a new form of community safety. Keep an eye on this, folks.