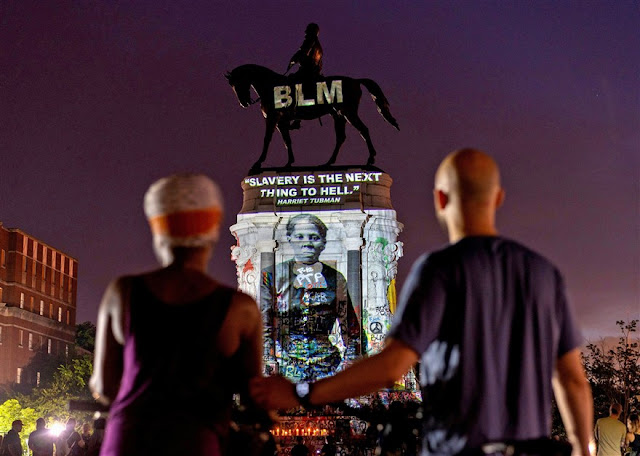 1. Mississippi State Flag - Major props to the NCAA and the SEC, as well as the athletes who followed through on not playing, or hosting future championship events in the state of Mississippi until the state flag was changed. Think about that for a second. It wasn't the fact that the flag bears the Confederate flag. It wasn't the years of racial injustice and heavy history in the state that caused the change. It was a threat to football. Make of that what you will. Either way, great job all around.

2. Ahmaud Arbery Killers Indictment - It's only an indictment. But its a step in the right direction. By the way, Breonna Taylor's murderers have yet to be brought up on charges.

3. NASCAR - I've never been more invested in NASCAR than the last two weeks. Of course, it is nice having a black driver which surely makes this viewer way more invested in the sport. But the length to which the sport has gone to eradicate underlying racial culture and also support Bubba Wallace has been great to see. It's been much more welcoming and for this person of color, removes the threats often associated with the sport. You can definitely make the argument that Steve Phelps (NASCAR president) and NASCAR did more for Bubba Wallace than the NFL ever did for Colin Kaepernick.

Again, not to beat a dead horse - but if the NFL didn't cater to its boy's club owners, and simply said, Hey Kap, we hear you, stop kneeling, and tell us how we can help your cause - it all would have ended. But like many black matters - they refused to see him or his message.

1. Coronavirus - Back at the number one spot, is our societal roommate that refuses to leave - COVID-19. And as expected, it's on the rise again in regions where opening measures weren't handled correctly. UGH...

2. Mask Debate - This is stupid. It really is awful that it has become a political topic. But the evidence is abundant - wear a damn mask. It's not that hard.

3. Affordable Care Act - If you don't agree with the ACA, that's fine. Policy effectiveness is another debate we can have. However, removing the ACA, and costing 23 million people the chance at healthcare in the middle of a pandemic with NO ALTERNATIVE is absolutely absurd.

1. President Retweets "White Power" - So...our President retweeted a video of a man yelling "White Power" in it. And then, deleted it. Either the President is intelligent enough to know that posting it long enough just to delete it would appeal to his fan base without having to actually agree with the sentiment in public, or the President is dumb enough to re-tweet a video without properly screening and reviewing it to make sure it supports his sentiment or political cause.

It's one of the two - and both are just so head shakingly bad.