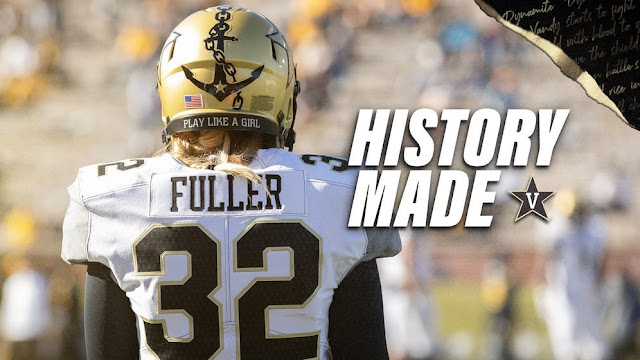 1. Scotland Free Female Hygiene Products - I thought this was so cool. And yes, that's coming from a dude. Scotland became the first country to make period products FREE for those in need of them within the country. As a man, it's hard to wrap the mind around the additional expenses women go through for matters of the menstrual cycle. The new offering gives some hope regarding female health issues and universal health care - that yes, it is possible.

2. Sarah Fuller - The very first female athlete to play in a Power 5 football game. Fuller, the starting goalie for Vanderbilt's Women's soccer team, serves as the kicker on the Football team as well. Forget the first, can we also just give props for being an awesome athlete?! Nonetheless, a great accomplishment in its own right, and socially confirmed by the number of men bothered by its occurrence.

3. Beyonce Grammy Nominations - Bey kills it again. What else can be said about the Queen?

1. Coronavirus - Yeah, I'm giving the Coronavirus the top "Down" once again this week. After the Thanksgiving Holiday, we're all expecting a tough few weeks ahead as Winter settles in, and yes, the Holidays approach. Cases continue to rise all over the globe, and we're still struggling to deal with this as a society.

2. Purdue Pharma - I have lots - LOTS! - of thoughts on the Opioid crisis. None bigger than the idea that it was started by our own industries. This week, we saw just a glimpse of that as Purdue Pharma pleaded guilty for its role in the nation's crisis.

3. Youth Mental Health - It's not talked about due to the obvious necessary survival of the pandemic, but the mental health ramifications of our youth have taken a huge hit. With early results beginning to rise, we're now getting a small glimpse of what will be resonating effects after the pandemic is under control. So many sad and unfortunate stories - scarring and stunting in so many ways.

1. Tiana Mangakahia - So much props to the Syracuse Women's Basketball Student-Athlete, who battled breast cancer, endured a double mastectomy, returned to the court this week and dominated. We forget the stories of the many young individuals who are battling the nasty disease of cancer so early in their lives. Tiana is a fighter and an inspiration.