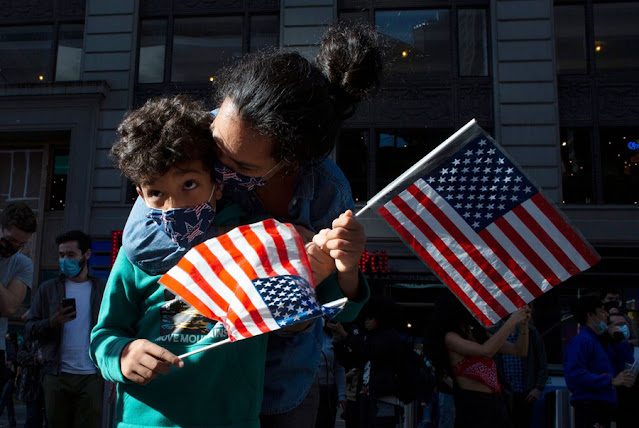 2. Poll Workers - Can we give a hand to the poll workers throughout the country? From the early voting dedication to the long hours of counting crucial ballots, poll workers have served an important role in the biggest and most democratic election in this country's history.

3. John King & Steve Kornacki - First, no one operates an electoral map the way John King does. I'm pretty sure he knows every county in America. Second, Kornacki is just behind King. I found his explanation of ballots to be counted - especially in this election - to be VERY educating and easy to follow.

1. Coronavirus - While the Presidential election stole the headlines, the virus is back on the rise.

2. Premature Win Announcement - Watching the President at 2:00am-ish in the morning announce his own victory (without evidence) was rather embarrassing. This isn't a biased politically affiliated comment, as I'm sure many would take it that way. The announcement just was so bush-league and unbecoming of anyone who has ever competed at anything. In fact, my beloved Knicks should stop playing in the second half and declare themselves the winners of every game. Seriously, speaking, that moment was cringy, and head-scratching.

3. Nore Dame Field Rush - Ummmm, so yeah, a big win over #1 Clemson. But we're allowing thousands of fans to rush the field in celebration? That was an ugly, ugly scene considering the circumstances of a said global pandemic.

1. Alex Trebek - Trebek was in my home every night. My mom and I watched Jeopardy all the time. In fact, I watch episodes on Netflix frequently. Trebek was a part of those memories. Rest in Peace to a synonymous figure for so many.

2. Baby Shark - Fun fact: Baby Shark has reached 7.04 billion - yes, BILLION - views on YouTube. Every parent out there I'm sure has contributed to that incredible number. Kudos to all Korean-American singer, Hope Segoine and producer, Pinkfong.