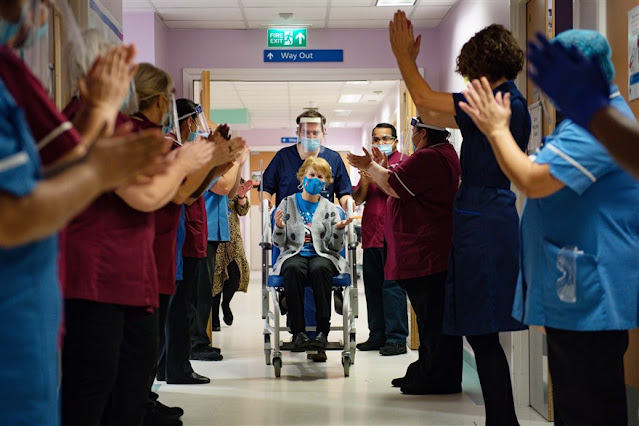 1. Vaccines - Well, it's here. The FDA approved emergency use of multiple vaccines (with more to come) and it now feels like there is a significant light at the end of this dark, scary tunnel. We're not out of it yet as the virus continues to rage, shutdown are pending, and vaccines distribution is sure to be polarizing. But at the very least, there is an answer forthcoming. Continue to stay safe, ya'll.

2. Rashinda Jones at MSNBC - This is small, but it is super cool. Rashida Jones - no, not that Rashida Jones of Ann Perkins...or Karen Filepelli fame - became the first black President of a major news network, taking over at MSNBC. The country needs a new shift in cable news in the worst way, and hopefully Jones can be a part of it. At the very least, it's nice to see the industry having representation at all levels.

3. Stephanie Ruhle - COVID has given us so many takes, opinions, thoughts, fears, and rants. Ruhle returned to her MSNBC show after testing positive for COVID and not only gave her testimony on the matter, but delivered one of the best monologues on everything COVID that I've heard since the pandemic began. Ruhle touched on it all, from the lack of leadership, to the many cracks in our systems - in regards to inequity - that it has unveiled. I recommend finding these videos wherever you can.

1. Brandon Bernard - So. Incredibly. Sad. I'm not sure how I can articulate the sadness I feel for the execution of Brandon Bernard this week. Seek out Bernard's story - even what he was convicted for. All of it, sand how our country snatched his life - again, so sad. We need to do better as a country.

2. Celebrity Deaths - The loss of Tomy "Tiny" Lister and Charlie Pride were just small parts of my childhood falling into the lake of the abyss. Lister, in his role as Zeus in professional wrestlinh intrigued me as a child (as really, anyone who wanted to destroy Hulk Hogan) and then later as "Deebo", as one of the greatest movie characters ever that then became a verb. And then there was Charlie Pride, a favorite of my mother who played his music throughout our home over the years. The idea that both succumbed to COVID makes it so much more sad, and of course, more 2020 than anything else.

3. Economic Stimulus - As specific areas continue to trend toward closure once again (i.e. New York City is set to close on Monday), many are still awaiting a stimulus package to help survive the shutdown sanctions. So many businesses are struggling, and our government has still been unable to provide any kind of relief. So, incredibly frustrating.