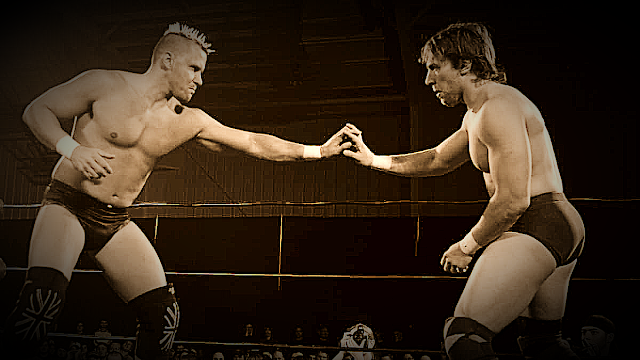 It's only right that I start this post with the code of honor...
:::handshake:::
The wrestling world was delivered a blow the likes of a Nigel Mcguiness European uppercut when Ring of Honor Wrestling (ROH) let the world know via a Tweet that it would be ceasing operations for the foreseeable future. While the "taking time to reimagine itself" line offered more cryptic thoughts than reasons for optimism of a revamped product - because well, who shuts down for several months and releases all of its talent? - the random announcement felt more like the final punctuation period on what surely will be an entity that deserves more for it's contribution to pro wrestling.
That final punctuation felt as flat, as emotionless, and as sudden as the kind of statement that rings true, but is so cold in its delivery - basically, dead upon arrival.
But, that's ROH. Well at least for me. It's history. It's legacy. It's memory. Full of so much impact and history, yet, forgotten. This is the company that was a certain style and expectation of pro wrestling BEFORE it became commonplace on your weekly television to sounds of "This-is-Awesome!" and chants of other company's acronyms.

ROH inspired so many companies. It brought a form of the strong-style influence perfectly wrapped and presented to an American audience that hadn't been seen, nor appreciated for a widened audience before. It gave us the likes of Bryan Danielson, Nigel McGuinness, AJ Styles, Takeshi Morishima, Samoa Joe, Tyler Black, and so, so, so many more.
I can romanticize about ROH, and yes, it's part of what wrestling fans do. Because, it was during this time in history when WCW was thrown in a closet and ECW suddenly became the kick-ass underground band that was now appearing on your local pop radio station, there was NWA-TNA (now Impact Wrestling) and ROH for this pro wrestling fan. They were alternatives. True difference-makers, in every sense of the word.
Both companies, who have had such star-crossed paths, yet, irrevocably-bound history, I always thought needed one another - only to see both of their stubborn ways and leadership prevent them from doing so. If only the "forbidden door" had a slight ajar in it during this time.
TNA and ROH working together always made too much sense to me. Maybe, it was just me. Call me crazy, but I would love for Anthem to purchase the library if possible.
Yet, for all of the awesomeness and memorable matches from ROH (Bryan Danielson vs. Nigel McGuiness at ROH Driven in 2007 being my favorite), and for all that it did in not only saving pro wrestling during a dire time but launching it into a new chapter, it ended like this. With a soulless, emotionless Tweet.
It's sad not because of not just how it ended, but because for the last 5-6 years, this one time ROH fan couldn't tell you anything about the product. Once Sinclair purchased it, and a host of other moves were made, ROH quickly became a caricature of itself, settling for an identity that felt more like one of being used by everyone and everything else, rather than the brand that created a standard that differentiated itself through its style, it's serious rules and it's intense focus on in-ring quality.
Despite the announcement for a return in April, whatever form ROH returns in - if at all, the chapter is closed. One of the most important components of wrestling history over the last 25 years - and my fandom - is gone. And sadly, it left us without having the type of celebration, recognition, or yes, dare I say - the HONOR it deserved.
ROH deserves to be more than just a footnote in pro wrestling history. It deserves so much more. Unfortunately, this is how it ends. I only hope the library ends up somewhere where it will be honored (see what I did again), and allowed to be expressed as revolutionary as it was.