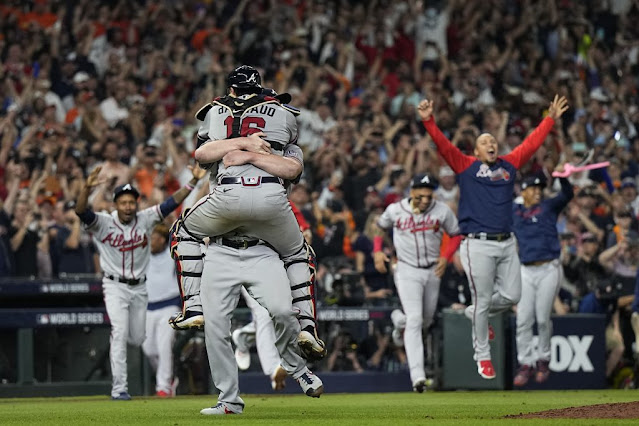 Well, baseball is finally over and if you thought the Atlanta Braves would be holding the commissioner's trophy at the end of the season, you are the biggest liar on earth, or you should probably be connected to something much more important in life.

This season was OK. That's not saltiness from the way the season ended for my New York Yankees, but truly, this year's baseball season just felt like a year of turbulence for the sport that made its way to the World Series in the way this 2021 season could only do. MLB just continued to do great things, but yet, willingly smash itself in the face with choices that diverted the attention away. World Series included.

Awesome. Annoying. Great. SMH. The MLB 2021 Season. Expect the same theme in the following thoughts on the 2021 World Series:

- One of the greatest stories about the Atlanta Braves World Series win this year was the constant reload of talent and imagination done by General Manager Alex Anthopolous. After losing one of the best players in the world in Ronald Acuna Jr., Anthopolous remade the Braves' outfield at the deadline. It's the kind of pivoting that often goes silent or overlooked while the goings good, or even when GMs feel the heat for whatever complaint fans want to attach to them. But again, losing your biggest star, and then the rest of your outfield - and then reloading mid-season to still win it all? Not. Easy.

- While on the matter of expectations, if you honestly had me rank the ten teams in the playoffs this year, I would have placed Atlanta at #10. Again, I believe the majority of baseball fans outside of Georgia would have done this as well.

- Great loyalty stories like the one of Brian Snitker are what make the organic storyline arcs of sports so tremendous. He's been with the Braves organization for nearly 45 years! I myself have never worked in one location longer than seven years. Kudos to Snitker for the loyalty, but more so, the Braves organization for having some kind of culture that breeds talent finding a home, and investing long-term. Rare in sports. Even rarer in any employment situation.

- Speaking of baseball lifers, it's good to see Ron Washington get to the top of the mountain. Should have been there earlier though...I'm sure Nelson Cruz still replays that line drive in his quietest moments.

- This World Series exhibited the constant battle of philosophy between the "I miss the way the game was played" crowd and the current "Keep talking about batting average, bro" group. Analytics, man. Watching very few starting pitchers get past the fifth inning, including a potential World Series no-no that was kicked away for the computer gameplan, yet watching Max Fried dial in a classic Atlanta Braves pitching gem, was the mix of happenings and scenarios of clashing cultures and ideologies for today's fanbase in this series.

I honestly don't expect this to get any better going forward. But I do think the game is pulling back, more so changing, just a bit on how the numbers are being told and used.

- The public relations of baseball is a mess, compounded by the continuous facepalm moments by Commissioner Rob Manfred. The man who once called the trophy that so many dream of one day holding up in triumph as a "piece of tin", traveled further down the road of his bizarre verbal approach to selling the game. In answering the question regarding the controversial Braves "Chop" gesture, Manfred pointed to the local tribes in Atlanta who support the gesture, then mentioned that baseball is a regional game.

Umm...great. Nothing like mentioning that baseball is a regional game on the biggest stage when you're attempting to attract a national audience. Not from Atlanta or Houston - don't bother watching this game, folks! Overdramatic response aside, baseball has clawed to grab national attention from it's league counterparts in the NFL and NBA, and managed to do so this summer with the Field of Dreams event. But now, NOW!!! - it's a regional game. Make it make sense.

Furthermore, MLB dipped its toe into the political spectrum when it moved the All-Star Game out of Atlanta because of Voting Bill SB 202. Of course, there was pressure from the players union, but regardless, baseball threw its hat in - whether you agree or not - into taking a stance on these social issues. When you're in, you're in (See: NBA and WNBA). Now, it seems like Manfred didn't want to further upstage the World Series - I get it. I really do understand the position he was in.

But, acquiescing to a controversial issue, similar in social standing to the one you held conviction on so weak. The entire thing makes baseball look flaky... and again, weak.

Why we name our teams after a race of people is beyond me. Because that's exactly what we do.

- Yes, the Astros cheated during 2017. I still believe that World Series should be stripped. However, Carlos Correa, Alex Bregman, Jose Altuve, and crew, are some damn good ballplayers.

- Dusty Baker continues to get close. And that's it.

- Jorge Soler's homerun in Houston just landed. No for real. It JUST did.

- On the topic of Soler, the World Series MVP trophy seems a bit...clunky, no?

- I've never appreciated Freddie Freeman's at-bats more than I ever have during the World Series. I always thought the dude was good, but the last six games really made me fall in love with his approach at the plate. Sorry, I haven't watched Braves' games closely since they aired on TBS.

- Random idea: how about a feature where you can watch any player's at-bat from around the league. You can even save them to view later, or get a notification to watch it live? Someone, please make that. I don't even want the credit. I would watch Freddie Freeman's at-bats all of the time.

- I don't care if you say I'm complaining about this topic. Maybe I'm getting old. But I've reached the point of really needing someone to convince me how World Series games ending deep through midnight is good for the game. Seriously.

I know the argument is that every World Series game since 1971 has ended after 11pm, and somehow the game is still here. However, that's the problem with baseball - bUt it's aLwAyS bEen LiKe tHis! dON't cHaNgE tHe gAme!!!

Want to grow the game? Ensure that kids can enjoy your most important moments.

I'm not looking for afternoon games as if stadium lights don't exist. I know FOX wants to protect its investment in NFL television. That's fair. But a 6pm or 7pm start time for a Sunday game at the very least seems reasonable. Hey, it's good enough for the Super Bowl. Am I wrong?

I'll hop down off my soapbox now.

- Finally, I would be remiss if I didn't say that a part of me worries about the state of baseball and the labor negotiations set to begin over a new CBA this winter. I can't say that I'm overly confident about not only a deal getting done but that deal being the best deal for the overall state of the game.

Not much confidence at all. I guess we'll see.