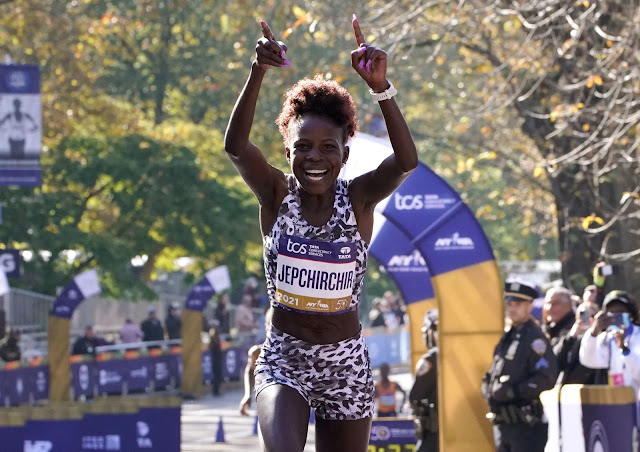 1. NYC Marathon Runners (and Winners) - Every year I marvel at marathoners - especially those who run the race in a ridiculous amount of time. The kind of time that one couldn't travel through all five boroughs if you gave them a car to do so. I'm lucky to have known several people who completed the marathon this year, and once again am in awe of winners, Albert Korir and Peres Jepchirchir.

2. Candidates of Color - Election Day was this week and it was especially interesting for me to see who remained motivated in the voting process following 2020's Presidential Election, and what the landscape will be as we head into midterms.

What we did end up getting is an election day that saw various people of color win seats in big cities like Boston, New York City, and Pittsburgh. The new diversity in politics is interesting and very much welcomed. Representation matters. I don't care what party you roll with.

3. Atlanta Braves - The World Series Champions. Seriously...who saw that coming? Kudos to the Braves for winning it all. I'm super pumped for an awesome guy like Freddie Freeman who deserves the accolade and the attention gained from the World Series stage.

1. Travis Scott Concert Tragedy - I can't imagine 50,000 people surging and bodies piling upon one another. As the details emerge from this, there are just so many concerns and scary knowns in it all. My heart goes out to the loved ones of those who died that night in Houston.

2. Details in Ahmaud Arbery Trial - From the mostly white jury to the details in the pursuit of Arbery, a lot of the details are frustrating, sad, and angering. Arbery's death hit me hard last year - well before everything that was George Flloyd. It just shouldn't happen...but his story was too innocent. He was going for a run...

3. Aaron Rodgers - Dude, come on. Now everyone has their own "research".

TIMOTHY A. CLARY/AFP via Getty Images