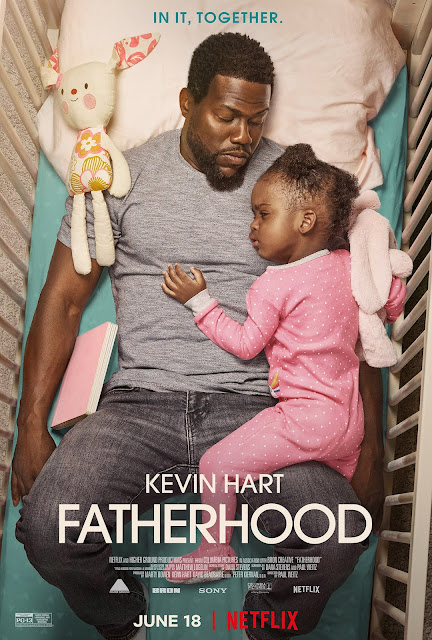 A new father copes with the adjustment of his life to fatherhood after the sudden death of his wife immediately following the birth of his daughter.

Matt faces his daughter on the doorstep of his in-laws and is saying goodbye as he internally wrestles with his love, his pride, his commitment to his deceased wife, as well as doing what is right for his daughter.

"Matthew, today was a good day for you as a parent. You keep all these little victories like you had today in a little box inside you. They'll be your most prized possessions."

Fatherhood was an impulse watch on a cold and rainy Sunday afternoon. Seeing Kevin Hart as the lead and the clips from the trailer, I was expecting a comedy. What I wasn't expecting was what Fatherhood would provide a more serious role for Kevin Hart.

The film, based on a novel, presented a heart-wrenching opening of watching Liz pass away right after the birth of Maddy. It's a film that is very fair in bringing forth the dilemmas of new fatherhood, while also illuminating the struggles of Matt who wrestles with "proving he could do this" to himself, for his deceased wife, to his antagonizing mother-in-law, serving the chip on his shoulder through it all, and doing what is best for his daughter. The film brings the viewer in the space of thinking about the journey for Matt from a carefree adult to shouldering the issues of so much, and his growth through this fatherhood.

For me, the relationship between Marion and Matt served as the most interesting dynamic of the film. And by the way, Alfre Woodard was sneaky good in her role - very much mirroring her role in Love and Basketball. The biggest takeaway from Fatherhood - Kevin Hart can definitely hold his own in a serious role.

The ending was expected, and the second half of the film felt more shallow than the deep first half set-up, but Fatherhood was just enough to get its point across and provide a solid watch.