100% Is Not Guaranteed: Navigating COVID & Parenting 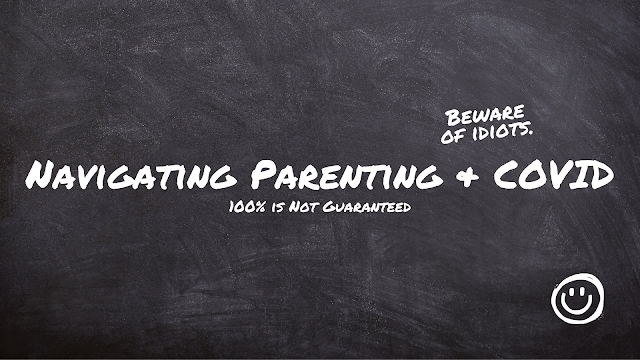 This past week, my son's school notified us that his class would be shut down for a potential positive COVID case. This occurrence marked the second time in less than a month my wife and I would have to endure this, with the first being an experience that likely will scar any parent.

What was the first time, you ask?

Well, imagine receiving the ominous message that a child in your son's class "potentially may be positive". And of course, because of the world we live in now - you know, all of us being expert COVID tracers and novice epidemiologists - you quickly do the math and realize said child had two full days to possibly transmit COVID to your son...and others. But yeah, YOUR SON.

What do they mean, "potentially may be positive?"

What if he is positive?

What if we are positive?

The story further unraveled that the parents of the said "potential" child were aware they were positive for the virus, yet, continued to send their child to school. Yes, I know what you're probably thinking - they effectively lied on the daily screening questions! Yup! They definitely did. If state officials aren't (and weren't) able to do anything about that, then what is the point of the questions?! But I digress...

Even after the entire investigation broke down, the parents of the "potential" child refused to have the child tested until giving in and doing so several days later. By then, we (and likely, the other parents) had already received affirmation that all was well - our little guy was negative.

Thank the good Lord above.

Double ditto on that divine gratitude, as the second "potential" possibility this week was indeed a positive case. But again, another negative test relieved our worries.
::::exhale::::

I continue to work on keeping empathy and compassion at the forefront of my viewpoint during this pandemic. As recent developments and evidence display the rise of the Omicron variant accompanied by a slight step back in our quest to return to whatever kind of "normality" is acceptable, I'm very much still triggered, and still scarred from 2020. Go ahead and call me "soft". Or a "snowflake". Or whatever. I understand the climate well. As we approach the new year, and as I've been drafting the DP Year in Review for 2021, I find much of myself still decompressing 2020, including our progression through this pandemic.

I know popular opinion is to move on. And many of us quickly forget each stage of the social norms developed and practiced through the pandemic, even if that stage happened not too long ago. The pandemic has aged us all and has made every step and stage of the way feel ten times longer than its reality. I know there are a handful of others who prefer to just take their chances with the percentages, and not the qualitative stories behind the minority who have suffered from COVID in a drastic way - including their families.

Truth is, I'm scared, yo. New York City was NOT an easy place to endure during that March to June 2020 period - I've said that multiple times on this site. With that, there is no amount of "assured" percentages of "survival rates" that ceases worry for me. Even as someone who believes in the work of scientists, trusts the idea of vaccines and boosters, and can be seen wearing a mask frequently outdoors in public settings, I just can't. I can't.

Because there is a vulnerability there that is compounded with the lack of control involved. We do have to live with this. But ultimately, the deeper lesson and fear that I'm wrestling with is that I cannot protect my son from this - even when I think I can, or have.

Sure, the double-duty of watching and engaging with him at home while working from home is annoying and difficult.

Stomaching the financial damage of paying for school while he's at home yelling and throwing tantrums as I attempt to play it cool on work Zoom meetings - nope, not that either.

The heartbreak of your son repeatedly telling you he misses his friends and watching him routinely draw and paint pictures for them - yeah, that will pass.

What gets me right in the gut and messes with my head is this: the idea that someone else's selfishness, bad parenting, idiocy, or however you prefer to describe it, could have impacted my son. THAT is jarring, to say the least. While it's not lost on me that he roams the same wicked world we all do, it's still very jarring, and sometimes I like to believe I can protect him from it all. Daddy got you.

I know...welcome to fatherhood. Welcome to parenting. This is hard enough. And there is so much in this cruel world that I can 100% prepare him for, and yet, there will still be plenty of room for error and fault. Even if it's not his own. I get that. I'm not that naive.

But there is just something about my inexperience or my unknowing unease about meshing the two - parenting and pandemic living - that remains unsettling for me.

Is there a book on parenting during a pandemic? Anyone?! Someone!?!

Regardless, I guess as a growing parent, I have to find a deeper peace with never being at ease. But it's a tough task when navigating this current climate with empathy and compassion while figuring out how to raise a healthy little boy with integrity - making sure you're doing right by both.

He might be running us up a wall, but he's COVID-free. For now...

So let's hit it three times for the post - Thank the Good Lord above!

And take it day by day. 'Cause, that's parenting...in a pandemic.