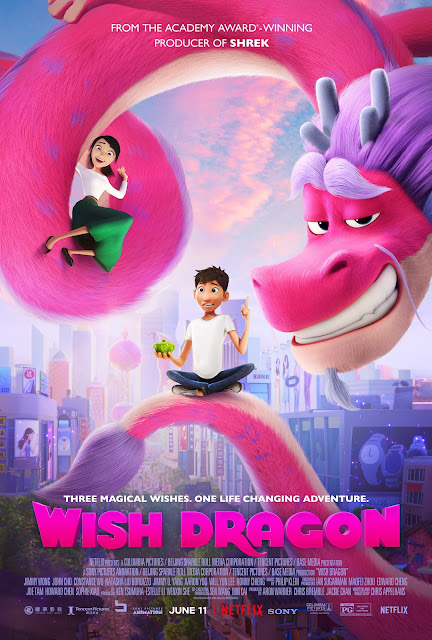 What is it about?
Din, a determined Teen who lost his best friend, runs into a wish-granting dragon who unveils the power of possibilities, but also of life's greatest values.
Who is in it?
Jimmy Wong - Din
Natasha Liu Bordozzo - Li Na
John Cho - Long
Favorite Scene:
After a series of pretending to be someone else ("David"), Din reveals his true identity to Li Na, and returns back to the old neighborhood with her.
Favorite Quote:
Mom: “I’m sorry I can’t give you a better life.”
Din: “You’ve given me a lot, everything that matters.”
Review:
My son has recently taken to animated movies a big way, and I thought after a Vivo viewing that was highly successful, I would give Wish Dragon a run as well. I'm both glad I did and didn't. While carrying a little more animated violence than anticipated (should've expected that from a Jackie Chan-produced venture - but my son still ate up the bad guys getting their butts kicked), Wish Dragon was actually surprisingly really, really good.
Wish Dragon focuses on life's meaning and carries the film with depth, thought, and meaning. I know, very deep for an animated kid's film. The plot at first feels like it's headed into cliche territory but eventually evolves in a way that really helps you see that the true antagonist of the plot is in fact losing yourself. I loved the way film didn't demonize success, or wanting to be rich and famous, but rather, the effects of losing yourself to the excess pursuit of it. There were also the basic (yes, cliche) lessons from the dragon, who moves from a dopey character into a rather serious one as we learn his backstory.
I also simply loved the diversity of the film. It was nice to have a film based on Chinese culture.
And for parents watching with their kids, Wish Dragon has plenty of humor throughout it for all ages, especially subtle moments for the adults. My favorite was the Dragon learning about all of the new technology.
Wish Dragon is definitely worth the push of the button on Netflix.
Grade: 4/5