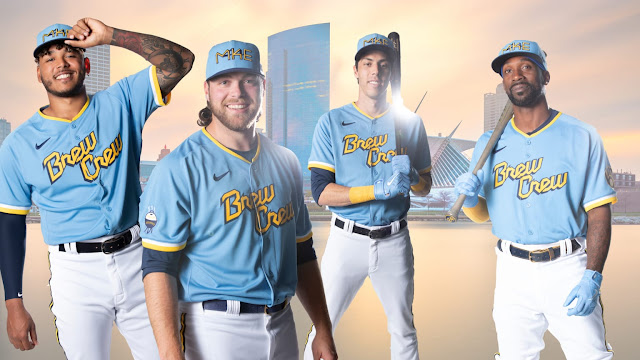 Before we dive into the Milwaukee Brewers Nike City Connect uniforms, I want to give some major props to the Brewers organization for handling the Lorenzo Cain situation. Allowing Cain to remain with the team long enough to reach the 10-year milestone, despite a subpar performance and every intention to designate him for assignment, is classy.

Of course, that 10 years (and 5 years with the same team) gives Cain added incentives to his pension as a Major League player. The Brewers didn't have to do that. Classy stuff.

As for these new threads, it's tough for Nike to surpass the aesthetics of the Brewers' current everyday design. The pinstripes, the combination of blue and yellow, the arc of the font across the chest - all of it just feels like the very best of old-school-baseball-in modern-age-aesthetics. And yes, there is the beautiful, amazing, fantastic logo that sits atop the hat is a baseball glove, wrapped with the secret message of "MB" (Milwaukee Br...you get it). It's so perfect, that it's downright one of the sports' greatest aesthetic treasures. 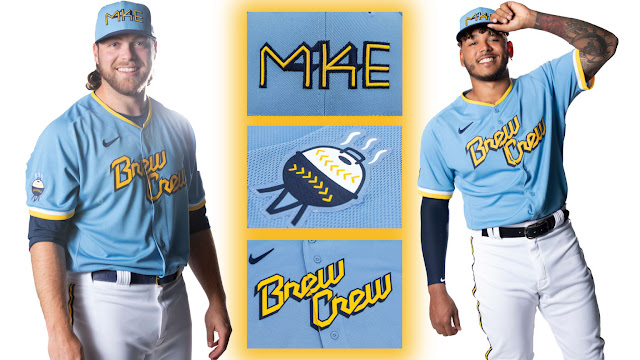 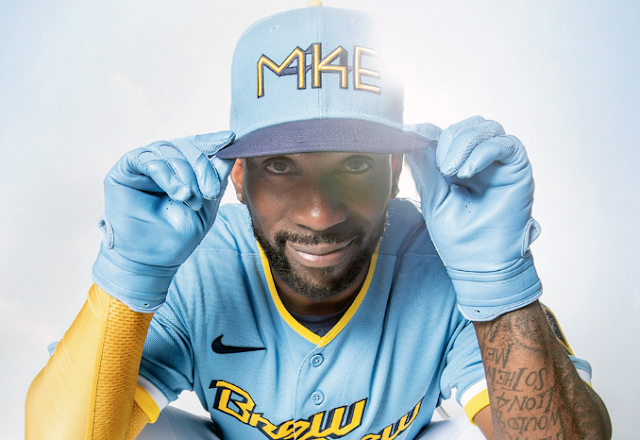 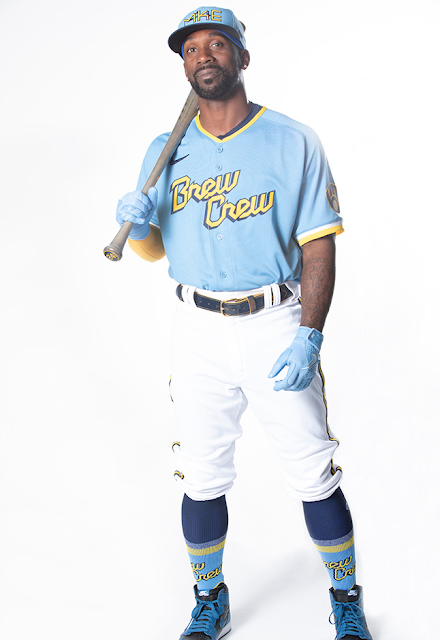 Well, they tried. I don't dislike the design, but I don't love it either. The overall feel comes across complementary to their current vibe but also carries a bit of a cartoon-like vibe that just misses the mark for me. Especially when it comes to capturing the city.

I do love the powder blue, which has made a comeback. The white pants though causes the entire aesthetic to feel incomplete - as if it's just a jersey, not an entire look. Nike has been sooooooo good in doing that with a few designs, while not so much on others. This felt like it could have done full "blue".

The "Brew Crew" tag line is nice, but still, the feel of the jersey lacks "Milwaukee" nods and vibes or at least, gives me a closer sense of the city and state, rather than just another alternative representation of the organization. No, the grill patch on the sleeve or the white and yellow stripe on the sleeve, that represents a "poured beer", does not resonate with me.

The hats are cool, adding "MKE" for the initials of the city's airport, as well as a hidden message (nice try!) of "414", the city's area code, is a cool gesture considering the original "MB" glove hat.

My favorite thing about the design is really an area where Nike has not missed at all in these designs - the chosen typography.

MY second favorite part? The socks.

Overall, nothing about this look will ultimately make me shake my head in disgust. However, nothing about it feels different from it feeling like a typical alternate jersey. I expected more, I guess.