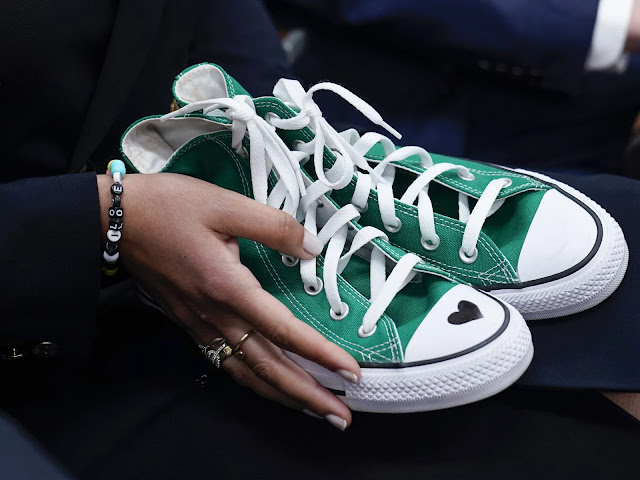 3 Up
1. New Gun Laws - This is huge. There are going to be some who take the negative approach and say that this isn't "enough", but considering our past, our current culture, and the politics (and lobbying), this is a tremendous first step towards simple sanity in gun control, reform, and safety within our country.
Also, much props to some of the Republicans who worked across the aisle to get this done. We need more of this, and less stalling to make the other side look terrible.
2. Matthew McConaughey - For what it's worth, McConaughey delivered a speech that hit most of America in the heart in just thirty seconds. The story of Maite Rodriguez's green converses hits home.
3. COVID Vaccines for Under 5 - Have we become completely jaded by COVID news? Regardless, I'm still in awe of what science has provided. Think about it, just months ago schools were still shutting down. Now we have vaccines set for release for children under five years of age.
3 Down
1. Gas Prices - For the first time, gas is now over $5! In other countries around the world, gas prices are at absurd levels. On top of that, food prices, among other goods, have soared. What a time in history. The 2020's have surely been interesting.
2. Patriot Front Arrested - White Nationalism continues to be the biggest threat to this country. What is the point of rioting at a Pride festival? How are these individuals bothering you, or taking away from your liberties? This story is still unfolding, but it is so infuriating.
2. Supreme Court Justice Threats - What are we doing as a society? An assassination attempt on a supreme court justice? Our society is in a bad way.
2 Interesting
1. January 6th Hearings - Thursday night already gave us evidence and testimonies we have yet to encounter from that awful day. We're also set for more this coming week...stay tuned, everyone. It's VERY important that we get to the bottom of it.
Also, Fox News not carrying the hearings says everything about their integrity, or even, their fear of their audience learning more about what is truth.
2. Justin Beiber - Kudos to Beebs for announcing to the world his diagnosis of Ramsay Hunt Syndrome. The condition has left the entire left side of his face paralyzed. It's a bold move, but I'm sure helpful to many who deal with various health struggles.
Cover Photo
Camila Alves McConaughey holds green Converse sneakers. Uvalde, Texas, school shooting victim Maite Rodriguez, who died at age 10, was wearing green Converse shoes when she died.
Susan Walsh/AP