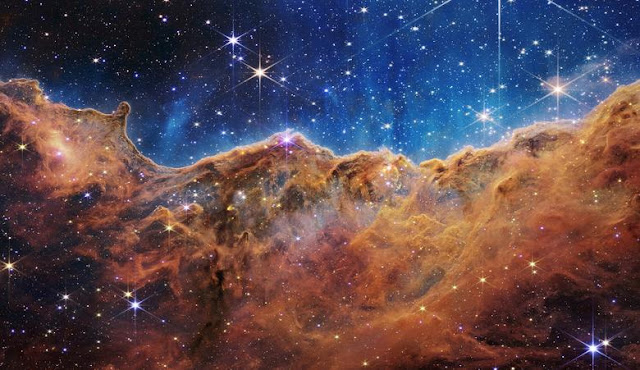 3 Up
1. NASA Webb Telescope Pictures - It's definitely a nerdy thing, but it is also a tremendous wonder to see the photos that came back from NASA's Webb Telescope. The photos, super crisp like we've never seen before, are images that make you wonder how big the Universe is, and truly, how small we are. Just a fantastic image.
2. Buffalo 'Tops' Reopens - After the hateful shooting that rocked its community, that very Tops Supermarket has reopened in Buffalo. The store serves as an epicenter for that very community, and while it'll be difficult, it's just good to know they are moving forward, rebuilding, and reconnecting.
3. Bartender Left $4,000 Tip - I'm a sucker for stories of the human spirit and just outright goodwill. Imagine the heart of a single mother bartender when a patron leaves a $4,000 tip on a $176 bill. That's cool stuff.
3 Down
1. Uvalde Shooting Details - The details and video coming out of the Uvalde Shooting investigation is downright horrific. From upwards of 50 police officers waiting around, to images of some of them on their phones while the shooting is occurring, it's just another layer to the tragedy and an element to the AR-15 safety debate.
2. 10-Year-Old Abortion Story - If the abortion debate and discussion weren't intense enough, add this horrific story of a 10-year-old girl who was raped needing to travel across state lines for assistance. What felt like an "outlier" argument, quickly became a reality, and furthermore became a realization that this happens far too often.
Honestly, all of it is just super heartbreaking.
3. Secret Service Texts - So, the secret service deleted texts regarding the events of January 6th? Yeah, nothing suspicious about that. SMH.
1 Interesting
Juan Soto rejecting $440M - Sure, the average annual value is low for a player of his caliber. Sure, fifteen years is a long-time, especially when most of the money is on the backend. And yes, Soto has reservations about signing long-term without knowing who the new owner of the Nationals will be.
But bruh, at 23, you turned down $440M, guaranteed? That's some guts.
Cover Photo
This landscape of “mountains” and “valleys” speckled with glittering stars is actually the edge of a nearby, young, star-forming region called NGC 3324 in the Carina Nebula. Captured in infrared light by NASA’s new James Webb Space Telescope, this image reveals for the first time previously invisible areas of star birth.
Credits: NASA, ESA, CSA, and STScI