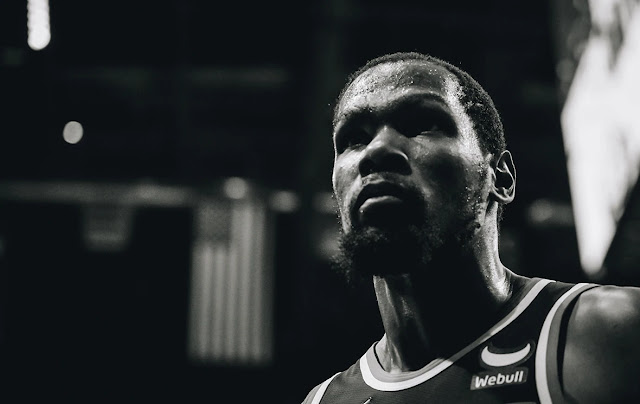 When people show you who they are, believe them.

That's what my thought process is reduced to regarding Kevin Durant, his trade request from the Brooklyn Nets, and well, everything else that surrounds the latest drama that has taken over the NBA (and in many ways, the sports world).

Kevin Durant is immensely talented. Superhuman in so many ways. If you see him in person (as I have many times at the Barclays Center as a Brooklyn Net, and once at the Staples Center as a young member of the Oklahoma City Thunder), you're simply in awe of his stature, his ability, and his grace on the court. It's the kind of aura that keeps you believing in the aura of pro sports, and the sheer exclusiveness of these human beings. It's in the same realm as LeBron James and Steph Curry, physical and ability marvels that go just beyond remarkable, existing in a realm of specialness that cannot be described other than comprehension with the eyes.

Kevin Durant is one of my favorite athletes to watch. He's that rare.

However, I'm also in that group that does indeed hold Durant's move to the Golden State Warriors against his reputation and, well, my own perceived clarity of his legacy (legacy talk is so overdone). Yes, championships are hard, and when you get them, you get them - and Durant was a contributing member of two title wins. You can't take that away from him. However, I'm still of the opinion that all championships are special, but they aren't equal.

That's where this Nets chapter of Durant's career was so interesting. He got the titles to evade the kind of clowning we see Charles Barkley receive from his colleagues on Inside the NBA on TNT, and among those who dictate championships as not just qualifiers for eternal lore, but a requirement to escape the "waiting room" that Barkley, Reggie Miller, Patrick Ewing, John Stockton...you know the names make their home.

Brooklyn was supposed to be different. He shunned the Warriors dynasty because of perceived disagreements with the organization. He, like so many else, left my beloved New York Knicks begging at the altar to pick up the sword of forging a new history with the Nets.

Among that, the Nets organization gave in to the superstar ransom that came with the deal - which also included a packaged deal for Kyrie Irving and a friendly max deal as well for their buddy, Deandre Jordan. Durant was given James Harden later on. The Nets acquiesced to the head coach position and the allowance of Irving's "availability". So much of what the Nets had built prior to Durant's arrival, was removed and replaced for well...Durant and Co.

After a couple of disappointing seasons and being swept in the first round by the eventual Eastern Conference Champions, Boston Celtics, Durant now fresh off of a contract extension wants out. And he wants to choose where he goes, and he reportedly wants specific members of those teams to remain so thus, he can play with those talents in a new location.

Sure, signing an extension and then demanding a trade is the highest kind of privilege there is. It's borderline the kind of move that makes you wonder about the "player empowerment" of the NBA (has it gone too far?) and also, the blatant disrespect of the binding contract concept. And quite frankly, it's that kind of move that just makes Durant a bad guy. Who does that?!

Still, for me, the highest level of disappointment is that Durant, who had the opportunity to lead - like, really, lead! - is realizing that the position he put himself in, isn't providing a reduced amount of adversity and resistance to winning.

In a year where the Golden State Warriors captured a fourth NBA championship sandwiching those Durant helped deliver, all of it furthered the narrative that Durant is now a "plug-in" to their dynasty and just an answer to a trivia question alongside Harrison Barnes and Andrew Wiggins.

Obviously, it's not true as Durant and the Warriors literally broke the NBA for a few years, but it does become illuminated as "footnote-like" narratives continue to surround him.

I think I wanted to believe in Durant. Despite my Knicks colors (and I do rejoice in watching this all burn), the idea of making the Nets, and his own career, somewhat that of a specialty in one, is the kind of quality I appreciate from athletes. After all, one title in Brooklyn does that for him. Just ONE! And that would mean much more than the two in Golden State (at least for a fan). Or probably any other he could attain by joining teams on his "wish list" such as the Miami Heat or Phoenix Suns (both former #1 seeds in their Conferences this year) going forward. But the window is closing, and Durant knows that too.

Durant's latest request is the kind of move that does make me reexamine the stature of "championships" for "legacy discussion". There is definitely validation and something to be said for Ewing, Miller, Stockton, etc... who stayed and steady a franchise for decades. Others come to play with them. What is that value in these discussions?

I've realized that maybe, Durant is not a leader. And in sports (as in life), the most talented individual is expected (or automated) to be that person. We too often associate the alpha player with leadership qualities, or the trigger of self-ownership competitiveness that came with Bird, Magic, and Jordan. Maybe Durant is just a dude who wants to hoop and doesn't care where his championships come from, as long as he gets them.

And you know what? There ain't nothing wrong with that either.

We - us sports fans - set the barometer for the discussion, we can't be upset when athletes chase that expectation.

Durant showed us what he was about when he left Oklahoma City for Golden State. He is once again showing us that this summer.

It's time to believe it.