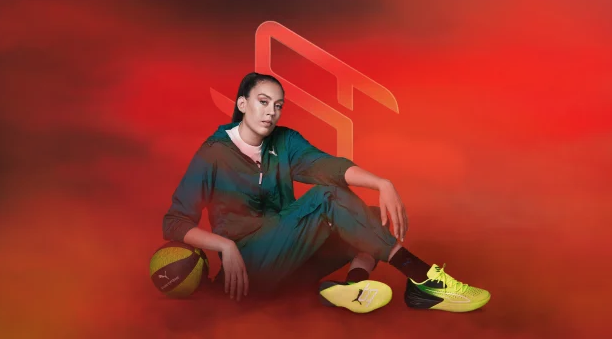 Signature sneakers for WNBA athletes? Ummm, yes, please!
This has been a long time coming. Since the debut of those signature Sheryl Swoopes from Nike, the market has not seen many women athletes given signature kicks, and more importantly, a platform for little girls and fans of the WNBA to emulate their favorite players and superstars - you know, the way we've always had it with our male athletes.
I want to live in a world where yes, little girls too can get excited about rockin' their favorite female basketball player's shoes. Shoes that are in their size...made for their feet.
Lately, we've seen a slow trend back into this space as the WNBA continues to gain popularity with a devoted following (like myself), but also as companies look to diversify their portfolio in a sports world that is ever-evolving.
I feel like Candace Parker helped revitalize that with the "Exhibit" line under Adidas. The design was endorsed, but not necessarily a signature shoe. So here we are...
What we have today is a market where Puma continues their foray into basketball with a big huge get in Breanna Stewart and the Stewie 1s. Nike is following that with the Deldon 1s for Elena Della Donne.
Here are some quick thoughts on the kicks: 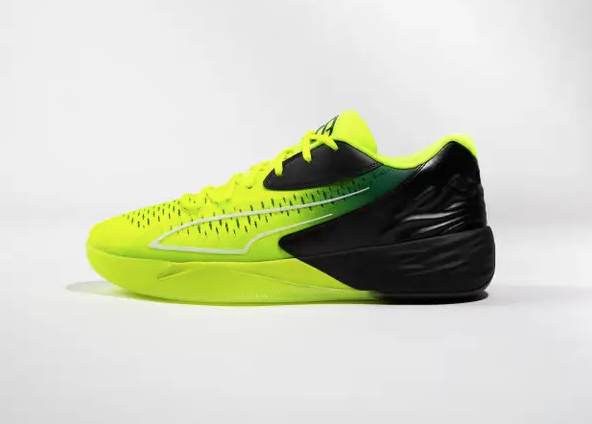 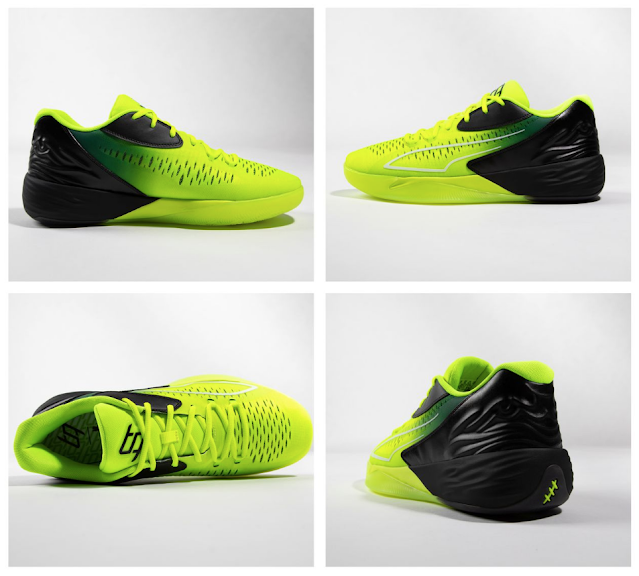 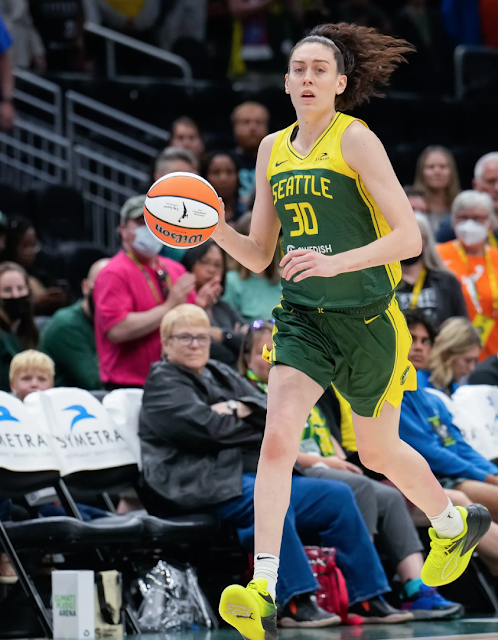 The Stewie 1s are fresh. I love 'em. I really, really do. Puma is really pushing the sleek design in all of their basketball lines giving the brand a new feel that is modern, yet, carrying elements of the old-school flavor we've come to love in vintage footwear that is Puma.
The highlight green and yellow seem like an obvious choice colorway for the Seattle Storm superstar, but they also add to the overall design concept that carries a futuristic and attractive look. The classic Puma logo stretches across the outside of the shoe in a striking yet, subtle way, giving the shoe an element that really brings Puma into a new generation. A favorite of my is how the design carries itself into the sole feeling seamless in appearance.
I'm a fan of the back end of the shoe, which carries a black section that gives the heel a base concept that adds to the design.
A full colorway offering would really be awesome for this shoe. It's the perfect design that lends to so many variations.
I'm sure Stewart had a big input into the design as well with the mesh layering, which seems very breathable and materials that carry for a light shoe.
I'm not a fan of the "BS" overlapping logo. In fact, I do think athletes (really, design concepts) need to move away from interlocking or overlapping initials and/or numbers for athlete logos, especially in shoe designs. It's amazing that after all of these years, the Jumpman remains the most recognizable athlete logo because its so distinct...but I digress.
The subelty I do love is the "stitch" on the heel that speaks to Stewart's personal journey with a serious injury. I'm a fan of those elements in signature shoes that exudes exclusiveness with personality.
These are dope. And I'm excited for them to hit the market. I'm also hoping this is a long line for Stewart. 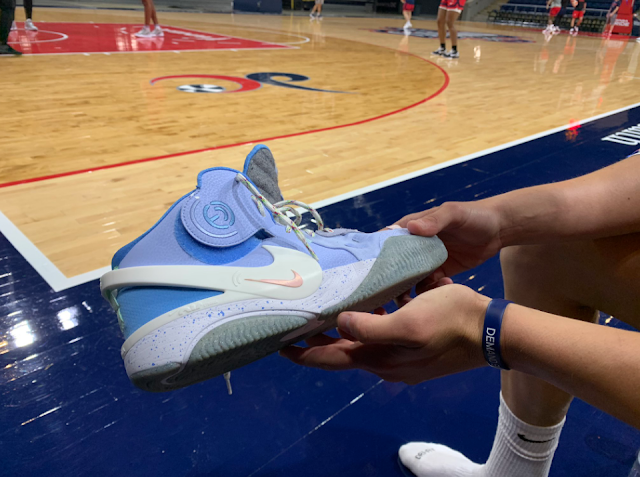 And then of course, while Puma was looking to shatter the women's basketball market, Nike (as they always do) said, "Hold on, we're joining the party!"
Nike will be unveiling the Deldons in October 2022, the signature shoe for Elena Delle Donne.
Let's not kid ourselves, everything about Elena Delle Donne screams a Nike athlete, and quite frankly, if you've seen the array of kicks she wears, I'm surprised Nike waited this long to officially get her a signature shoe.
Very different from the Stewie 1s which are low top, mesh lining, and appear, lightweight, the Deldon 1s are high top kicks with a hardened shell, hardened layering, and even a velcro situation for ankle support (naturally for Delle Donne's history.
And of course, like everyone else, her new logo of a circular "EDD" is present on the shoe.
I'll exhale here...shewwwwwwwww. I've already jumped on the soap box on "logos". 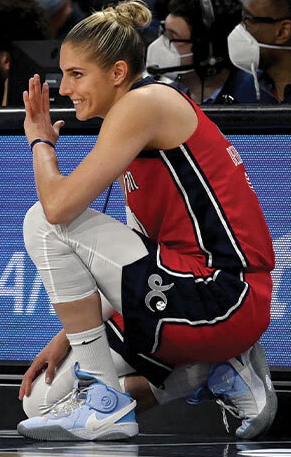 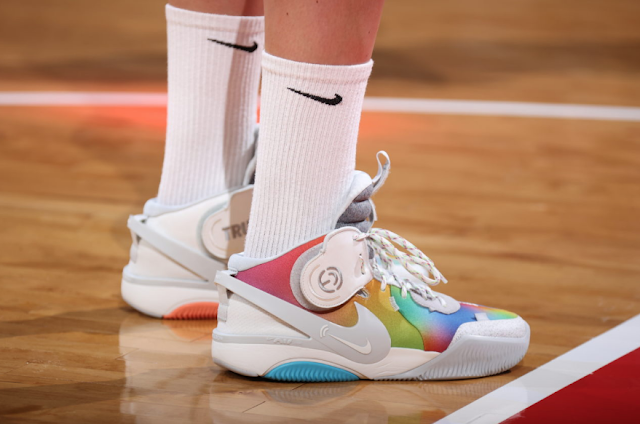 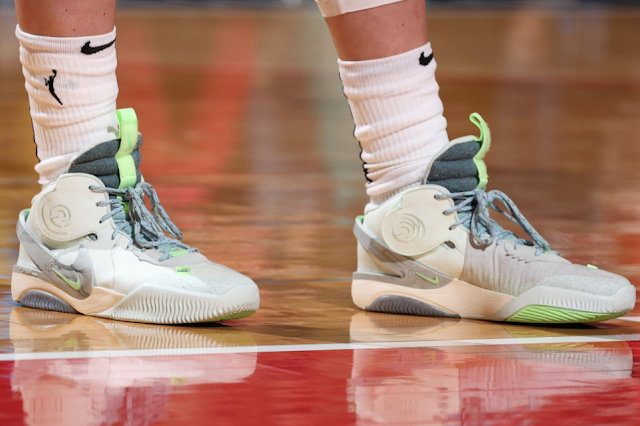 Regardless, this is yet another great debut for a line, and quite frankly I'm here for the numerous amount of colorways to be expected from this line and design concept. Especially the ones we've seen her wear already.
I do find it odd though that these will be released AFTER the WNBA season, but of course, just in time for school and the traditional basketball season.
---
Photos courtesy of Puma and Kicks.com