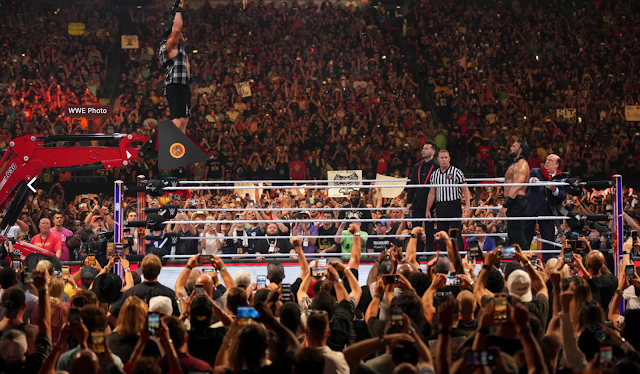 With the recent announcement of Vince McMahon retiring (my thoughts on Vince's legacy), and really, the appointment of Paul "Triple H" Levesque holding the golden pen as the lead for creative going forward in the WWE, that ultimately was the biggest draw for me heading into SummerSlam. I wasn't sold on the main event or the big stadium. It was the possibility of a "new era", and also the fact that SummerSlam (like Wrestlemania and Royal Rumble), needs no general intense build-up for me because well, it's already engrained into my being. It's nostalgic, it's tradition, it's...SummerSlam.

WWE can keep that trademark tagline if they like. Free of charge.

Nonetheless, as someone who has generally watched less and less WWE programming in my pro wrestling fandom, I was so intrigued to see what felt like the beginning of not just a post-Vince era, but an era that possibly could pull me in on a weekly basis. You know, the way Triple H's NXT used to. Or, you know, the way WWE used to make us all feel - the reason we're all somewhat fans of this art form.

SummerSlam did not disappoint. I can't tell you the very thing that made the event feel different - maybe pointing to a few moments or soundbites here and there - but SummerSlam felt different. It was just wild. It was fun. And there was overwhelming energy to the show and product that hasn't come through the screen for this fan in maybe over two years.

WWE has to earn back my trust, but this show was a damn fine way to start doing just that. Here are some quick thoughts and notes on Summerslam 2022:

- The stadium shows always adds a big feel to the event. Not many pro wrestling companies can pull off this kind of environment and spectacle as WWE can.

- I think it's a unanimous feeling that most pro wrestling fans miss the old norms of changing presentation sets for each event. I do get the reasoning from a production standpoint as it creates a nightmare on so many levels. However, maybe it's just me, I absolutely loved the simple approach of the digital screens and the impressive long aisle to ring. Even something as subtle as the slight bend in the aisle is soo old school. I loved it. 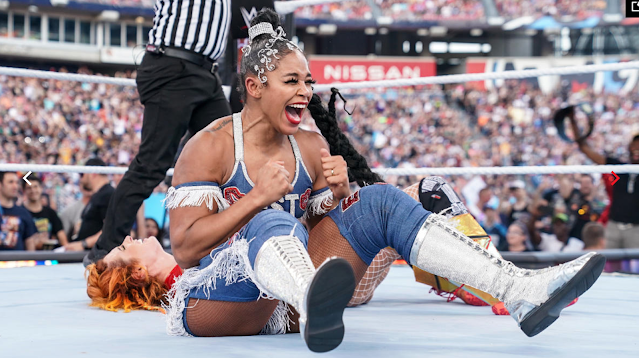 - By the end of the night, I think we all forgot how amazing the match between Becky Lynch and Bianca Bel-Air was, especially with the extra-curricular events that followed. This was a damn fine match with Becky Lynch showing her toughness by gutting out the match in what appeared to be a shoulder injury.

The return of Bayley, Dakota Kai, and IYO Sky was interesting, and for the most part, felt like the first of many cards to be pulled signaling that "The Game" was now in charge.

Bianca Bel-Air should be a massive star in a few years if handled and guided correctly.

With that said, I once thought the same thing about Becky Lynch as "The Man". I enjoyed "Big Time Becks", but it always felt "not-as-good" to what always felt like an organic rise in the "The Man" character. Maybe it's just me. Nonetheless, I'm glad to see Becky is back in the babyface role. The audience in attendance and public opinion seemed to accept it rather easily, thus supporting my own feelings on the matter. 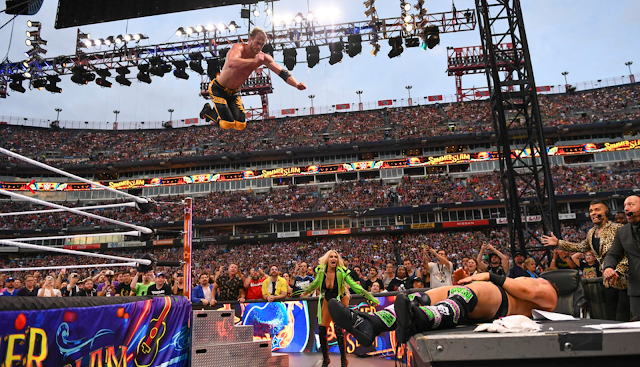 - I'm probably wayyyyy too old, or probably just too disconnected to appreciate (or fully understand?) Logan Paul's celebrity to be impressed by his performance as a celebrity, and not just as a wrestler. He was really good, don't get me wrong, but I just don't view the bar and standard in the same light as say a Bad Bunny at Wrestlemania. Again, Paul was tremendous - but he really does look like someone who should hold his own in the ring. Higher expectations, I guess?

However, can we give The Miz his flowers? A lot of this match was The Miz and what he continues to do so well - entertain and make others look great.

- Theory is soooo good in his role as the punk kid you can't stand. His facials are very "punch-my-face-worthy". Also, I'm thrilled to see Lashley continue to get his due - the dude is a monster.

Is it me, or somewhere over the last few years, the United States championship leap-frogged, or has left behind, the Intercontinental Championship? They just don't feel on the same level anymore.

Also, let me step up on my soapbox here for one moment: there are too many championships in pro wrestling right now. In every company, there are just pointless championships.

- Look, it's not the worst thing to ever happen in pro wrestling, but Edge turning heel to start a faction, having that faction turn on him, just for him to return as a babyface to go after that faction, is just head-scratching.

It's Edge, so we'll be interested. But this whole finding a new character in this latter chapter of his career for Edge has been all over the place. Miss me on "The Brood" stuff, too.

My wife watched Summerslam with me (totally shocking, but made it through the event - even more a sign for the WWE product attracting the casual of casuals) and found Dominick Mysterio to be "unwatchable". So there's that.

Also, I need Rhea Ripley's shoulder and back workout regimen/routine.

- Pat McAfee is so likable in the WWE. Also, I need to give Corbin his due, I've been hard on the guy over the years as a fan. I still miss him "being down on his luck". That produced some entertaining stuff.

- As for the tag-team championship match - I can watch The Usos vs. The Street Profits anywhere, any day, anytime. Always - always! - entertaining. Nothing else I can say here.

Yes, the Usos are locking up tag-team of the year in my opinion.

It's only a matter of time for Montez Ford to be on his way as a singles star, right?

However, there is something there too for Angelo Dawkins, no? 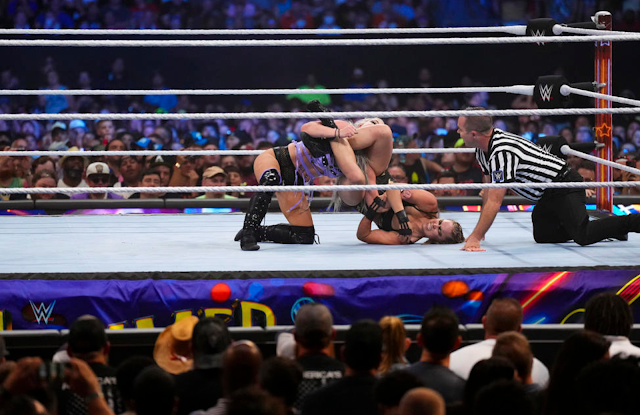 - I enjoyed the Rousey vs. Morgan finish. It was creative in getting to a conclusion that keeps them both strong and the title on Morgan. Rousey as a badass heel also just seems like the right thing (since forever) to do. We need less mic time for Rousey, and more just straight-up ass-kicking Rousey. 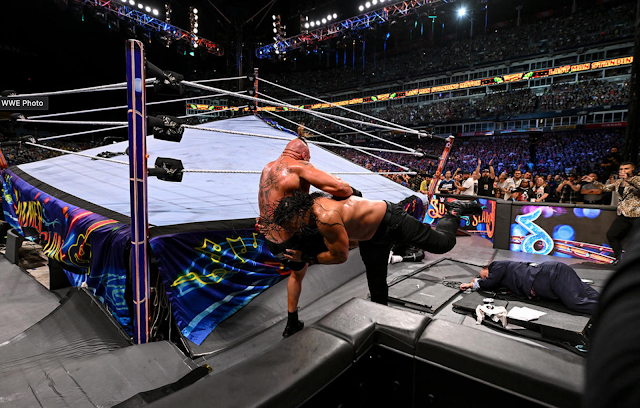 - I absolutely loved the main event. I wasn't overly excited when the match was made out of nowhere (more so as a result of injuries and need), but this was so, so, so enjoyable.

From the hard-hitting offense to Heyman's gold performance in pleading "for his Tribal Chief", right down to the chaos of the Usos, and Theory's attempted "cash-in", all the way to the ring being elevated in the air, and a damn tractor being used, and even Michael Cole's "count faster!" line - all of it was epic chaos that produced great entertainment.

Ultimate storytelling on display. And truthfully, the image after the match was even more dramatic than really what had happened.

Roman Reigns is by far the biggest, most special attraction in pro wrestling right now. And no one is even close. Brock Lesnar, might be number two. It's a larger-than-life element that is so sorely missed in wrestling today. I know fans complain about it, but I like these stars not being "available" to us every week. Oversaturation has killed the likelihood of these larger-than-life figures in today's products.

Sorry, just wandered up on that box again.

Overall, Summerslam was terrific. I'm definitely checking Raw out, and possibly even Smackdown to see the continued changes in the product. I'm hoping this is indeed a new era and not just a new chapter in the same saga.