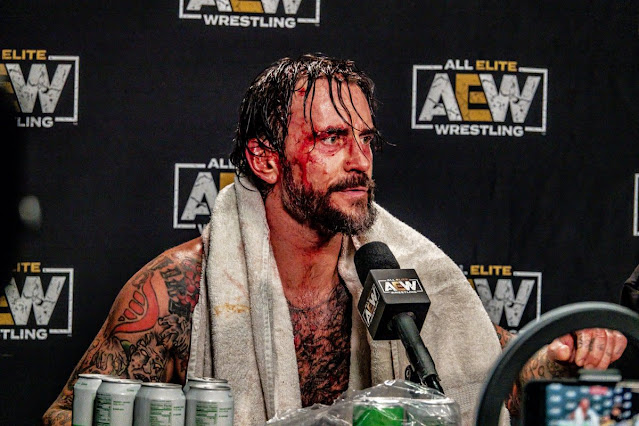 I've always found the pro wrestling press conference to be an interesting dichotomy of the essence of the art form. In an era where kayfabe is dead (or not what it used to be) and the lines are immensely blurred between real life and storyline, or at times, mixed in for engagement, interest, and controversy, the press conference schtick, and the pre-show round tables, sit in this odd space.

Does it live within the space of the pro wrestling world through the illustrious glory of kayfabe? Or is it a real, authentic, full-access medium to the real matters pertaining to the business of the product?

Maybe, I'm the only one being worked. Possibly.

As you can imagine, this is where my thoughts sit in regard to the now infamous CM Punk presser following AEW's Double or Nothing pay-per-view (or premium live event, if that's your vocabulary). I can't help but ask myself multiple times, "Why?" in response to the entire ordeal. And not in an intriguing way, but out of sheer confusion for its occurrence.

Of course, we exist in an era where the backstage happenings in pro wrestling are more interesting than the on-the-screen product. But this...this was such a head-scratcher.

When a "press conference" allows the star of a product to go in-depth on matters behind-the-scenes that no one asked about, asked for, or had an interest in at the time - as a fan, I'm just not sure what to make of it. Controversial? Yes. Will it incite interest? Of course! But at what cost?

Look, I don't think CM Punk's return to pro wrestling has been a failure for AEW. However, I don't think it has been the overwhelming success I thought it would be following that awesome Friday night in Chicago. In my opinion, Punk hasn't been amazing, and in many ways has contributed to the growing feelings (at least for this fan) of AEW serving "names" and not building its own stars.

It's the repeated trend for which TNA in its growing years was outwardly crushed. And considering the rating comparisons of both in their growing pain (and open for criticism) years, the hindsight on the history is quite interesting. But that's another discussion for another time.

The entire two-minute expletive-laced "promo" (or whatever) by Punk felt more cringe as it moved on, because quite frankly, it didn't connect to current storylines, didn't portray his character in line with its current on-screen position, and simply stole the headlines away from what should have been the biggest story in the return of their best shot at a mainstream home-grown star in MJF.

From the lens of it being shoot, brother(!), or as we're taking it, a talent just airing dirty laundry, it just comes across as even more head-scrathing.

Even more cringe? Bossman Tony Khan sat to his left making wildly shocking faces to the comments - some expressing disbelief - as Punk gave fans insight into the real-life scenario. Surely, Khan in that moment wrestled with thoughts of supporting this deal with Punk that surely comes with some managing negatives, while also having to support a band of EVPs that are responsible for helping him upstart this thing called AEW.

What we ended up getting out of this was Punk being immediately sent home without being named, and the AEW World Championship once again in the state of limbo and question.

Making matters worst, we just had a storyline that mirrored this exact real-life scenario with MJF, which is also rooted in real life. Make it make sense.

This can all be behind us in a matter of a couple of months. Backstage drama is not rare in pro wrestling, and we've certainly seen our share of real-life matters flood to the public's consumption unsolicited.

For this fan, what this situation reveals is the kind of leadership to expect from AEW, specifically Tony Khan going forward. AEW's "honeymoon" phase is certainly over and with a revamped WWE product, relying on the "cool, anti-WWE" sentiment that once provided equity is beginning to disappear. And fast.

I've felt myself slowly pulling away from the AEW product, and this situation does not help re-engage me. Nothing about a press conference that reveals details about behind-the-scene relationships (and drama) that makes the company's top star (at least positioned as such) look like a disgruntled and entitled bad person, is not a good look. Even worse, it's hard to root for.

And that's the bottom line for all of this - for this wrestling fan - just hard to root for.