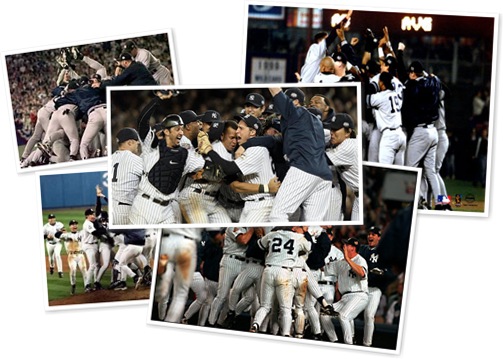 “…And The Yankees Are Champions of Baseball”

They were the words of Joe Buck so long ago. The words that defined the Yankees championship in 1996. The first one that I was able to witness. And to this day, I absolutely love hearing that call. There is just something about it as it brings an unconditional smile to my face every time. Every. Time. And in retrospect, it came during an era when Yankee fans took winning, division titles, pennants, and World Series performances for granted. However, over the past eight years, somewhere we were humbled. Brought back to reality. In fact, we witnessed the universe flipped upside down in 2004. And once again in 2007. And it seemed like forever before we could hear those words again.

Who knew seven words could mean so much?

On most occasions, I try to allow myself of at least a day to thoroughly understand a situation or occasion before commenting on it. It allows for more of a rational response, and less of an emotional reaction. However, tonight is different. And for obvious reasons…

The Yankees are champions of baseball.

And as I sit here punching the keys at two o’ clock in the morning, I am reminded of the earlier Yankee Championships. The ones connected to my childhood. And although, it is a different year, different team, and different accomplishment…that feeling is the same.

That feeling of exhaustion after emotionally being invested in the season for over 9 months. Not to mention, the stress of October.

That sick twisted knot that seems to grow in the pit of my stomach in October, and would digress a bit in between games. Only to come back on the first pitch.

The chaos and passion that is New York City, and why I am blessed the good Lord has made this my home.

The sudden excitement of the “Yankee fans.” You know, those that rarely watch a game during the summer, couldn’t name the lineup in August, yet, decide to flaunt their new found allegiance because its now cool to do so.

I especially love them.

And finally, though we always, occasionally, rarely, never get to the stadium, there is still that time to share each and every game with my father, the same way we have since 1991.

Yup, that smile is back. And I’m sure every Yankee fan shares it as well.

I guess seven words are that powerful. And especially so, in the moment.