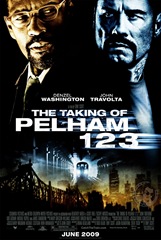 Armed men hijack a train within the New York City subway line with specific intentions and purposes, while putting the lives of New Yorkers in the fate of an everyday dispatcher’s hands.

After refusing to discuss an ongoing accusation and investigation of accepting a bribe, Ryder, knowing of this history, pressures Garber into admitting to the crime in front of officials by threatening to kill a teenage hostage.

“Life is simple now. They just have to do what I say.”

Pelham 123, a remake of the original thriller is an intense movie with lots of action, great acting, and gripping drama. Denzel Washington and John Travolta are both great in their respective roles, especially Travolta who pulls off the role of the psycho mad-man. The movie is filled with end-to-end action, sleek camera angles, and well written, and high-grade dialogue.

Pelham 123 is an awesome movie that is similar to the movies in the Bourne Trilogy for its unpredictability, action, and constant must-see feel. Highly recommended, and a definite watch.