The Answer is Now Incorrect For Iverson 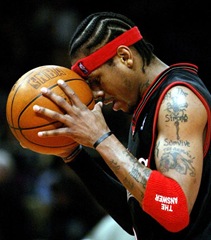 So Allen Iverson was passed over by the Knicks.

Yes, the Knicks are terrible. And yes, the Knicks are being highly criticized for not signing Iverson to at least make things interesting for Knick fans. However, have we looked at what else that statement says?

Allen Iverson was passed over by the Knicks.

Have things become this bad for Iverson?

The answer is yes. And this is a prime example of how fast things can go wrong for an athlete in any sport, especially the National Basketball Association.

Iverson for years was the little guy that could. Dominating games, and giving up us body at the mere height of six feet. Iverson, the first overall pick in 1996 by the Philadelphia 76'ers, entertained fans by his ability, quickness, and scoring. He’s earned and MVP award, and has been to the NBA Finals with the Sixers.

However, since his trade to Denver, he has become exposed as a player that was more flash than substance. Tagged as a ball hog, and a superstar that does not make his teammates better, Iverson slowly began to grow out of favor with many scouts and GM’s around the league.

Denver gave up on him. A few games after being dealt to Detroit, he was relegated to the bench. After signing with Memphis, he played three games, and now finds himself back on the free agent wire.

As much of a fan favorite that Allen Iverson is, it seems much of the extra baggage that came with Iverson has finally caught up with him. Despite playing harder than most players in games, Iverson dogged it in many practices. Who can forget the infamous “we talkin’ about practice” press conference? Iverson has had many run-ins with coaches, refuses to come of the bench, and seems to be a greater liability than an asset for a franchise.

Charles Barkley, who has been known to never hold his tongue stated that if Iverson intends to continue in the NBA, there comes a time in every athlete’s career where he must realize his limitations.

The problem is, Iverson never believed he had limitations. It’s what made him such a great player, but now makes him just another former star with a fading career, no ring or championship pedigree.

We’ve seen this before. With Stephon Marbury, Isiah Rider, Shawn Kemp, Latrell Sprewell and others. And slowly seeing it with the likes of Tracy McGrady.

Guys who bought into their own hype. And paid much more than market price.

Hopefully, Allen Iverson gets back into the league one day (Rumors now say the 76’ers are interested). Hopefully, he can get over his own ego, get out of his own way, and finish his career the way his fans would want him to.

And as for talking about practice? Now, more than anytime, is the best time for Iverson to begin caring about it.