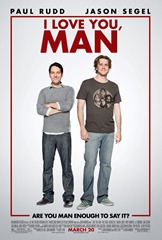 A friendless man goes on a series of “man-dates” to search for his best man at his upcoming wedding.

Peter finally works up the courage to give Sidney a call to hang out, and leaves a rather nerve wracking induced message that is filled with awkward sayings from him attempting to sound cool.

I Love You Man is a very funny film that has an interesting and unique plot to it. A film that is subtly hilarious and lends a comedic entertainment quality that doesn’t revolve around over-the-top scenes. “I Love You Man” does good job of bringing to light the issue of boundaries within certain relationships while being entertaining and funny.

Paul Rudd, known for his great improve, carries the movie in his role as Peter Klaven, the friendless man who desires to find brotherhood and friendship, with witty and ridiculous sayings and terms that steal the movie.

A decent film that is entertaining and hilarious. A recommended film for those in need of an easy watch and a laugh.