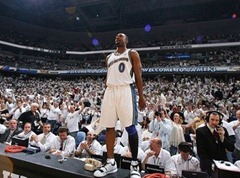 On the heels of the NBA suspending Arenas without pay for his tryst with firearms in his locker, everyone must be asking, what in the world was Arenas thinking?

Arenas does have licenses for the firearms that were flaunted in the Washington Wizards locker room, when he and Javaris Crittenton played their version a wild wild west draw. However, like Burress, Arenas’ guns were registered in another state. Despite that fact, Arenas playing and drawing real-life guns as if they were super-soakers in a jokingly manner over a $25,000 bet exhibits the kind of macho bravado with child-like behavior that Arenas has come to be known for.

A few years ago, yours truly wrote a piece endorsing Arenas for an NBA All-Star Game (Arenas Showing World That We Are Indeed Fools). Then, Arenas began to show the type of player that we all have come to know. Talented. Unbelievably talented. He had a chip on his shoulder. He wanted to prove everyone wrong. From being skipped over for the United States Olympic Team, to being snubbed for the All-Star team, Arenas had a motive – that he belonged. It was why he chose to wear number 0 – to remind himself of what everyone thought of him at one point.

However, 0 now stands for the level of I.Q. Arenas is displaying regarding his NBA career.

It is understood that gambling is a huge part of some professional athletes lives. Heck, it has been a part of American culture for as long as history allows. Michael Jordan and Charles Barkley have been known to endure such habits, so the lifestyle is understood.

However, the need for guns in the locker room? Why?

No answer is at all logical in answering that question. Heck, Pa 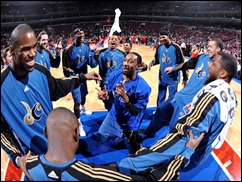 xico Burress had more of a logical answer for carrying a gun into a nightclub!

Now Arenas faces an indefinite suspension from David Stern, and a possible void of his 6 year, $111 million contract.

And since we are on the topic of basketball players that just don’t get it, what is with Jayson Williams? The former New Jersey Net standout beat a trial in which he faced the max sentence of life in jail for killing his limousine driver. Now, Williams is back in the news after crashing his vehicle while intoxicated. Sometimes, second-chances aren’t enough for those who do not understand it.