The Big Unit: “One of the Best Player’s Ever to Wear a MLB uniform” 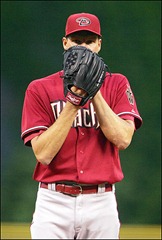 After twenty-two years of service, “The Big Unit” Randy Johnson finally has decided to retire from professional baseball. While the news may just gain a blurb or a highlight package in certain media circles, Johnson’s career should not be understated – he was one of the best player’s ever to wear a Major League uniform.

While I understand that he was never a popular guy amongst the media (especially here in New York) or was highly marketable, “The Unit” was one of the rarest combination of physical uniqueness and remarkable talent that this earth has ever bear witness to. There have been various pitches who have been physically intimidating, but few were intimidating and talented, if at all, at least one, was able to do so, and that was Randy Johnson.

As he stood on the mound with his 6’10'’ bird-like, wiry frame, Johnson’s wind up and follow through looked more like he was taking one giant step towards home plate while throwing 97mph-plus. Not fair. And when he felt like being mean, he whipped that sharp slider that still haunts lefty hitters in their sleep. Not fair at all.

Johnson, who finished as a member of the elite 300 club, with a record of 303-166, and finished second all-time in strikeouts with 4,875, did so during a notorious offensive inflated time we have all come to know as the “Steroid Era”. Add in the various complete games, no-hitters, and on May 18th, 2004, in Atlanta, where he was perfect.

Johnson’s statistics speak volumes about his career. Till this day, it is amazing to look at his 2001 season with the Diamondbacks:

Although my immediate memories of Johnson were not the greatest such as his time as a New York Yankee (His second season), or his time shutting down the New York Yankee (Basically anytime he pitched against them), Johnson has always been one of my favorite pitchers to watch.

As he finally hangs it up for good, it will be sad to see him go. I’ll miss that view of that tall imposing figure hiding his weapon of choice behind his glove, while blocking his face, ready to unwind one of the greatest things the sport has ever seen. However, even more so privileged that I had the opportunity to watch him, Pedro Martinez, Roger Clemens, and Greg Maddux over the past few years.