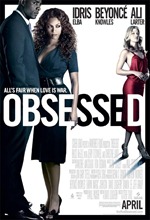 A executive president with a wife and child has his entire life placed in jeopardy after a temp worker from his office becomes obsessed and begins stalking him.

The fight scene between Sharon Charles and Lisa Sheridan.

After watching Obsessed, I cannot clearly fathom how it was number one at box offices across the nation. One would think word would eventually spread about the film. Despite that, I’m sure others felt robbed of their two hours after watching this as much as I did, maybe more since they shelled out the near ten bucks to see it.

Let me just say, Obsessed is not the worst film ever. It has a great core plot, and actors capable of pulling it off. However, where Obsessed hits fan is its lack of writing. The characters have no depth, the dialogue is head-scratching, and the plot is left with too many logical holes that just cause viewers to laugh and not take the film seriously. Such examples were Lisa suddenly stalking Derek without any explanation, Sharon suddenly calling Lisa’s phone, or hey, an executive president of a huge corporation not being able to defend himself legally against a temp worker.

On the other hand, Ali Larter did the best that she could in the role of the psychotic Lisa Sheridan. Beyonce was alright as well in her first featured role. However, once again, with the way the plot unfolded, at points you weren’t sure who was indeed crazy – Derek Charles? Sharon Charles? Or Lisa Sheridan herself?

If you could hit the reset button on this project, Obessed has the potential to be a good movie. However, it is one that strikes out big time. Don’t bother renting. You’re better off waiting for it on FX or TNT where you can flip the channel during the terrible stuff.