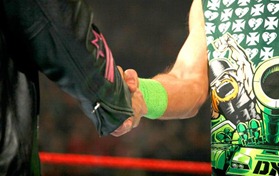 What a night January 4th was! From the buzz on the internet, the reactions from wrestling fans, and the sheer excitement of what the future holds, the night was a total success. Like I described in the first part of this series (Never Never Land), as the clock creeped toward the eight o’ clock hour I found myself with jubilee that was borderline embarrassment. The kind of embarrassment that had my tag team partner probably wondering just how great is this addiction of pro wrestling that yours truly suffers from?

However, she is new to this addiction. She doesn’t understand the connection to my (and others) childhood that this addiction holds, and the nostalgia that is and were the Monday Night Wars. Even though, to her only one show existed on January 4th, as she despises Vince McMahons company, it was obvious there was a bit of curiousness of what each show would bring. 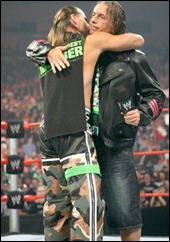 Yet, that is why January 4th was exciting. New fans of professional wrestling were able to experience just a small taste of how great the late 90’s/early 00’s were, current fans were finally given an option on Monday Nights, and old fans that tuned out, tuned back in to see what all the craze was about.

And although Raw pulled a 3.5 plus rating, and TNA earned it’s highest rating ever of 1.5, both shows were great. From Hogan’s comeback to the business, Ric Flair’s comeback, a new era in TNA, and an unbelievable match between Kurt Angle and AJ Styles, the biggest story of the night was the reconciliation of Shawn Michaels and Bret Hart.

Two of the all-time greats, who were rivals inside the ring, and even greater enemies in their personal lives finally buried the hatchet and put the issue of the Montreal Screwjob to bed. By far the best moment of the night, and one that this Hitman fan will never forget.

All in all, a great night that lived up to the expectation. Rumors are that TNA may move iMPACT to Monday Nights due to the success of the trial run. Hopefully it happens, so January 4th could be just the beginning, and Never Never Land can reopen every Monday Night.