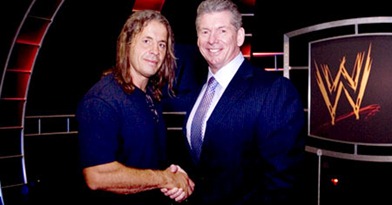 Every wrestling fan has heard that phrase in regards to the industry that they love. In wrestling, where the demand for talent is high, the value of trust is low, and the crap shoveled behind-the-scenes due to politics is as high as the Appalachians, one would think that “never” would would indeed be a real concept.
Prone for broken relationships and bridges, the wrestling business has seen scenarios develop beyond the entertainment product and more real than life itself, still defy those justifications for the feud to continue, as clearer skies prevailed. However, with all the broken relationships, bridges, and deceit that were eventually amended, one chapter remained unfinished – Bret Hart.


Without going into a long and winding history, Hart, left the business in which he was considered one of the greatest in. From the death of his brother (Owen Hart), his career altering (and eventually ending) fallout with once close friend, Vince McMahon, to the toll that wrestling family took on his and his family’s life, Hart was bitter, and held a grudge against many within the industry.

In certain poetic irony, Hart was born into a wrestling family, went in the family business of wrestling, and watched the wrestling business destroy it all.

However, after twelve years of being away from the business, Hart returns this Monday on Raw. After Hart boldly and confidently saying that he will never appear on WWE programming, Hart will succumb to the age-old saying in the business.

And if this Monday night couldn’t get any bigger (1 Night. 2 Companies. 3 Hours. Fans Will Get The Pin), wrestling fans are describing it as “Bret Hart’s Homecoming.” A way for Hart, McMahon, critics, fans and the Hart family to go out – the right way – the way his career and his family deserved to.

And if you know yours truly, Bret Hart is one of my all-time greats in any form of sports and entertainment. Want proof? Just take a look to the right of this blog.

Getting back on track, this Monday has a feeling that has been gone for too (and so) long. With the idea of both shows bringing their best and other interests such as Hart’s return, Hogan’s TNA debut, and all of the other rumored surprises lined up for Monday, January 4th, the anticipation is indescribable. If I could, dare I say, it’s child-like. Sort of that never-grew-up aura surrounding it.

With all the “nevers” that were said, who would've thought 2010 would begin like this for wrestling fans?

I know I never did.

Never, did I think wrestling fans would have this type of excitement again.

Then again, I guess we will never learn, never say never in the wrestling business.