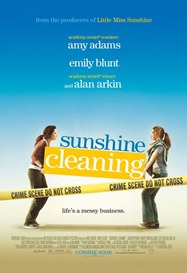 After her son is removed from school, a mom begins an unusual business of biohazard removal/crime scene clean up service with her enigmatic and unreliable sister. Through her desperation and operation of the business she learns more about herself, her son, her father, and that life is indeed the messy business.

Rose attends a baby shower for a friend from her high school days. As she attempts to impress her friends from high school who are expecting greats things from the former head cheerleader, Rose, who struggles with self confidence, realizes that although what she does may not be impressive to her friends, it was valuable in what really matters in life.

Sunshine Cleaning is a film that is another example that well-thought out independent films are much better than high-budget glitzy productions. Sunshine cleaning is a movie that connects with the majority of its viewers due to it’s realism, genuine issues, and authentic situations.

From Rose who is attempting to straighten out her life, to her sister, Emily, who is unreliable with no direction, who suddenly finds a connection of coping and appreciation for her mom after her suicide, to Alan who is a crazy father, and Rose’s son, Oscar, who is as imaginative as they come, Sunshine Cleaning depicts a family learning about life, and most importantly, learning about their desires to connect with one another.

A film that is entertaining, funny, and thought-provoking with real characters, great dialogue, and better actors that bring it through. 90 minutes that will most certainly not disappoint.