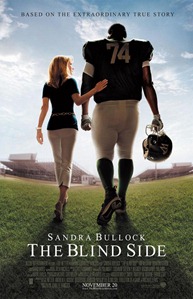 The true story of Michael Oher, a caring, yet, traumatized and homeless boy who became an All-American and NFL football player with the help and guidance of a caring woman and family.

After having his head kicked in front of the referee seeing his coach stand up and defend him, Michael blocks the arrogant pass rusher up the field and over the railing behind the end zone. Then proceeded to tell his coach he thought it was time for the kid to go home.

“Courage is a hard thing to figure. You can have courage based on a dumb idea or mistake, but you're not supposed to question adults, or your coach or your teacher, because they make the rules. Maybe they know best, but maybe they don't. It all depends on who you are, where you come from. Didn't at least one of the six hundred guys think about giving up, and joining with the other side? I mean, valley of death that's pretty salty stuff. That's why courage it's tricky. Should you always do what others tell you to do? Sometimes you might not even know why you're doing something. I mean any fool can have courage. But honor, that's the real reason for you either do something or you don't. It's who you are and maybe who you want to be. If you die trying for something important, then you have both honor and courage, and that's pretty good. I think that's what the writer was saying, that you should hope for courage and try for honor. And maybe even pray that the people telling you what to do have some, too.”


Well, what can be said about The Blind Side that hasn’t already been mentioned? The film is a great feel good movie that tells the remarkable story of Michael Oher from homeless to NFL first round pick. A movie with a great message, better underlying morals, and some comedy to keep the film from being a sappy story.
Sandra Bullock’s role as Leigh Ann Tuohy was every bit as good as the Academy Awards claimed in giving her an Oscar. Tim McGraw seems to have a niche for playing the father role in football movies, and quite honestly, Jae Head playing S.J. Tuohy, might have been the most entertaining character in the film.

All in all, not much to say here that hasn’t been heard elsewhere. A great film, and a very recommended watch.