Revenue Sharing: Levine – Where Has The Money Gone? 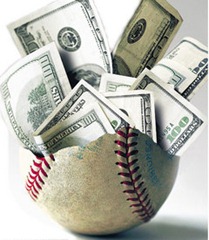 Here we go again! More arguing about revenues, revenue sharing, salaries, salary caps, and how it all affects baseball in it’s competitive balance. These issue came to pass this week when Milwaukee Brewers principal owner Mark Attansio made comments regarding the Brewers ability, or inability, to resign their top stars, most notably Prince Fielder. The fireworks ignited when Attansio stated that the entire Brewers opening day roster payroll was less (and it’s true) than the New York Yankees starting infield.

After constantly being the target representatives for large market teams, Yankees president Randy Levine finally responded with words of his own. Levine stated:

“I'm sorry that my friend Mark continues to whine about his running the Brewers. We play by all the rules and there doesn't seem to be any complaints when teams such as the Brewers receive hundreds of millions of dollars that they get from us in revenue sharing the last few years. Take some of that money that you get from us and use that to sign your players. The question that should be asked is: Where has the hundreds of millions of dollars in revenue sharing gone?"

The Yankees are rich. They are wealthy. The have the most storied history, most recognizable brand, and the largest city in the world as their fan base. These truths are self-evident. Yet, for a Brewer team that just bid against themselves and overpaid for Randy Wolf, it seems a bit spoiled in nature to claim you cannot resign your biggest star athlete.

While I won’t beat a dead horse with more fodder on the pros and cons of a salary cap in Major League Baseball, Randy Levine has a great point. With the Yankees doling out over $175M over the past seven years and contributing nearly 92 percent of the total revenue sharing pie, the question has to be asked, where exactly are those millions going? While teams who embrace and even indulge themselves in the underdog “small-market” title state “financial inabilities” in competition, there are other organizations going about their business competing and improving themselves (kudos to the Minnesota Twins, Atlanta Braves, and Tampa Bay Rays).