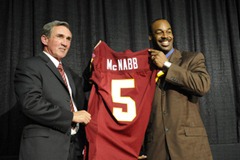 It is often said the city of Philadelphia is home to the worst sport fans in the United States. They are notorious for their jeers, harsh criticism, constant negative outlook, and lest we not forget, the infamous booing of Santa Claus. However, none of those descriptions truly describe Philadelphia until it was apparent how the city treated, and ultimately booted, one of the NFL’s best players and greatest class acts in Donovan McNabb.

McNabb, who began his tenure as a Philadelphia Eagle was booed horrendously on draft night, produced a body of work in his time in Philly that not only removed the question marks about his potential, but could land him in the Hall of Fame one day, was ultimately sent out of Philadelphia as if he meant nothing.

Year after year, besides the constant scrutiny from fans and even teammates (looking at you Terrell Owens), McNabb has done nothing but win and give the Eagles organization and the city of Philadelphia all he has had. From Super Bowl appearances to multiple NFC championships, a clean rap sheet with the league and his peers, to an even better rapport with those amongst the charity circles, Donovan has been what the Eagles thought he would be – a franchise player.

As I listen to the clips and sound bytes of fans on talk radio from Philly, I can’t help but wonder what exactly does the city of Philadelphia want from this guy? Most importantly, why is it an athlete that has accomplished so much treated as if he has never accomplished anything for the organization or the city?

I’m not from Philadelphia, so maybe I, and many of us who question not only this move, but the way he has been sent out of the city are not aware of the real and true reasons. However, as a sports fan looking into the warped sports community that is Philadelphia, I can’t help but wonder these things.

I can never imagine an athlete like Derek Jeter, Eli Manning, or David Lee being sent out like that here in New York City. Heck, good (but not great) players like John Starks and Paul O’neill still receive standing ovations, especially with Yankee fans taking the privilege of unofficially retiring Oneill’s #21 by not acknowledging any p 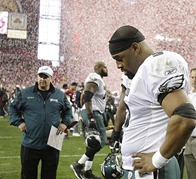 layer that wears the number.

Look, the Eagles might have traded McNabb because they think he is finished. And to be quite honest, they have always done a terrific job of evaluating players towards the end of their careers. Eagles’ fans may also have their opinions that Kevin Kolb or even Michael Vick is the right QB to move forward with into the future.

In the end, Philly fans wanted a divorce. They always wanted McNabb out. And they got it.

In the end, Donovan McNabb’s exit out of Philadelphia may be one of the strangest, and most undeserving exits by an athlete in a city in recent memory – maybe ever.