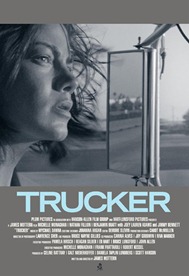 After taking the advice of his mother, Peter hits the ball in his first baseball game, but flies out. After the out, he continues to run around the bases. Runner and everyone else in attendance were curious as to what he was doing. After crossing home plate, Peter looked at Diane and stated, “Did you see me, I hit it”. Diane smiled and said, “yeah, you kept your eye on the ball”.

Diane: [After showing Peter to play baseball] Listen, you gotta take a swing at that thing if you want to get anywhere.
Peter: I just want to hit it, that’s all i want to do.
Diane: You can hit a homerun.
Peter: No, I can’t. I know what I can do and what I can’t. And you, think your so tough, trying to tell everyone what to think, but you’re the one that’s always scared of stuff. You’re the scaredest [sic] person I know.

Trucker is a very unique film. One that is so unique, that it is understood that it may not be everyone’s type of movie. However, Trucker is another independent film that is great at engaging its viewer and not dumbing them down. Not everyone likes to think or use their imagination in movies, if you don’t, Trucker is definitely not for you.

The film has very short and concise dialogue that is very powerful and meaningful. In fact, some scenes have little to no dialogue, and leave the interpretation up to viewer. The relationships between the characters are interesting, especially the one between Diane Ford and her son Peter.

Michelle Monoghan does an excellent job as Diane Ford, the conflicted, yet brash Trucker who suddenly comes to grips with what she has been running from. Jimmy Bennett also does a great job as Peter, Diane’s 11 year old son who is just as hard headed and defiant in the relationship.

In the end, Trucker, is a great film for those who do not like everything served to them in a movie. For much of the film, it leaves the viewer to think and take from the scene what it wants, including a very open to discussion final scene.

A recommended film that is worth the 93 minute running time.