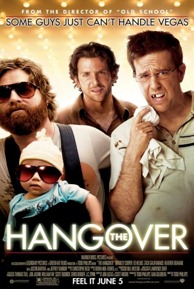 Four men venture over to Las Vegas before their buddy’s wedding for a Bachelor party they would never forget. After a wild night of partying and drunken misadventures, three of the groomsmen must retrace their night and use to the clues to find their now missing about-to-be-wed buddy.

When the three guys find themselves in custody for stealing a police squad car the night before, the two arresting officers agree to let them go after they served as test dummies for the children to practice and experience using a taser gun.

Alan Garner: Do you know if the hotel is pager friendly?
Lisa (Hotel Receptionist): What do you mean?
Alan Garner: I'm not getting a sig' on my beeper.
Lisa: I'm not sure.
Alan Garner: Is there a payphone bank? Buncha payphones? Business.
Lisa: Umm, there's a phone in your room...
Alan Garner: That'll work.

Well I’m sure a solid and influential review at this point in regards to The Hangover is near pointless, as everyone and their cousin as the saying goes, has seen the film. However, contrary to popular action, I had not, and was recommended to watch The Hangover, as it was billed as, “one of the funniest movies you will ever see.” While, I  will admit The Hangover is funny, and at times hilarious, “one of the funniest moves you will ever see” seems like a stretch.

Now, that view could very well be due to the timing of viewing the movie, as it is in reflection after the general consensus hype. Nonetheless, The Hangover is a movie with a clever plot of men retracing steps of the night before not in order to find out what happened, but to find their friend.

The greatest attribute to the success of the Hangover is the definition and uniqueness of the characters. Each are distinct amongst the entire group, which helps the story and the comedy. The real star of the movie, and quite honestly in my opinion, the character that made the movie was that of Alan Garner, played by Zach Galifiankis.

However, in the end, the film is very similar to many late comedies in the market, The Hangover needed lude and offensive material in order to capture and generate laughs. The random actions from the night made the film entertaining (especially Mike Tyson singing Phil Collins), but definitely not as funny as films such as 40 Year Old Virgin and Orange County to name a few.