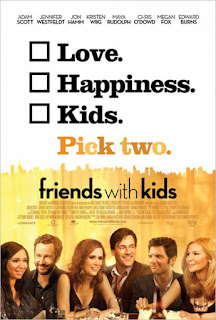 Two friends decide to have a child together without all of the strings attached of romantic emotion to avoid the changes that children can have on a relationship.

After taking a trip to Vermont for the holidays, things come to ahead in a confrontation at the table between Jason and Ben in front of everyone.

Ben: So, why didn't you guys ever even try to get together?
Jason Fryman: It's too much familiarity. It's like she's one of my limbs.
Ben: And that's bad, because...?
Jason Fryman: Because I hate myself

Friends With Kids is another film in-line with all of the movies that seem to take real-life issues in life and present it in a comical, yet, still truthful way. We know the types, Knocked Up, 40 Year-Old Virgin, This is 40, Bridesmaids, and on, and on. FWK brings a new interesting dynamic of friends who are running out of time to have a child.

While FWK presents the issue in a semi-authentic way, with one couple that is married an making it work, the other couple whose romance has burned out after they had children, and of course, the two friends who are avoiding all of the emotional stuff, but get wrapped up into it anyway. While shedding an interesting view on how children change marriages, the movie does come across a bit negative on having children as if it's some devastating blow rather than something that changes the marriage for one way or the other.

While Jennifer Westfeldt directs this film under what seems like the handbook of Judd Apatow, the movie is an interesting one that is made entertaining by the crew from Bridesmaids. Maya Rudolph and Chris O'Dowd are hilarious, and Adam Scott really carried the movie and delivered something very different to his character on Parks and Recreation. However, honestly, I really feel like the film could have done more with Kristen Wiig, in fact, she might have been better suited for the lead role rather than Westfeldt, herself.

All in all, FWK isn't great, but it's interesting, funny, and sort of ends up leaving a guy like myself wondering if I just watched a chicflick. Overall, it's entertaining.