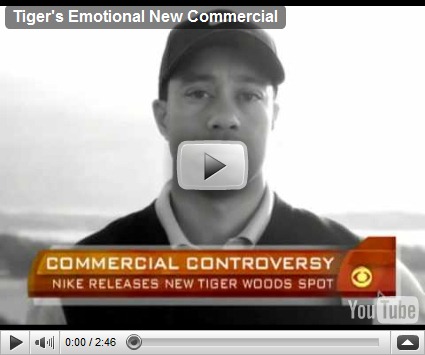 There has been tons of debate and many, many, comments over the recent Nike commercial with Tiger Woods featuring the voice of his father, Earl Woods.  While the impending return of Tiger Woods’ return to the golf course this week in Augusta is the main story surrounding Woods, many question his judgment in regards to approving such an advertisement.

It is well aware that the repairing of the Tiger Woods brand is well under way. Tiger is attempting to “let us in” and humanize himself with the ad without having to speak or say so himself. However, the  biggest issue is in regards to the voiceover which is his late father’s voice.


The controversy is surrounded by the usage of his deceased father, and the ambiguity of the message by his father in the advertisement. Despite the comments being taken from a sound byte, the comments leave questions on whether it is intended to be Earl Woods talking to his son in a heavenly/morbid style of manner, and whether the comments are in regards to his recent troubles with infidelity and public backlash.

Honestly, my initial reaction to the ad is not as crazed as the majority public opinion. Is he using his deceased father to help repair his image? I highly doubt it. Tiger always has valued his father and their relationship. In the toughest time in his career, it may have been a way for him to seek and share his father’s words of wisdom.

I find it very difficult for anyone to tell another person about their feelings for their father, and whether they are exploiting their parent’s death. Tiger and Earl Woods relationship, and how Tiger feels his father would respond if he were here would only be known by Tiger.

Although some may think other wise and look down upon it, there is some merit to the commercial. The advertisement by Nike and Tiger has everyone talking about Tiger Woods and the commercial. For the first time in almost half a year, its not in regards to women and “sex abuse”.

In fact, I found the commercial to be very powerful, direct, and creative. Another great job by Nike, and if he wins the Masters, this commercial will just be a another checkpoint in what could be a huge return story for Tiger Woods.