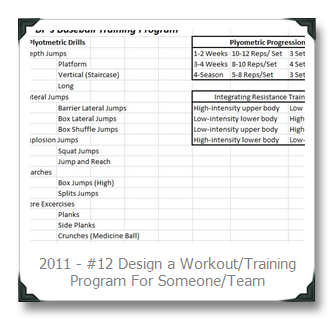 After completing Graduate school, which included many physiological and exercise science courses, I developed a new found respect for exercise, fitness, and anything physiologically related. As I once stated in the post, New Beginnings, I now often find myself with a keen eye for any type of movement, especially when I am watching the elite athletes on television or recreational ones running/jogging or playing in nearby parks. With less usage for applying such knowledge besides my own workouts, I continue to build upon the education I’ve acquired by reading and keeping up on new developments in fitness and exercise.

To harness this new found interest, I’ve decided that in the year 2011, I would attempt to come up with a workout/training regimen for an individual or sports team. A regimen that is not based on cliché fat burning or muscle building tricks or shortcuts that often flood our society, but one that is designed and tailored toward proper building, improving and accomplishing the goals of the individual, but developing a foundation for further wellness. Over the past three weeks, I had the opportunity to develop a program for my former roommate and teammate in college, who now coaches JV baseball in upstate NY.

While the program leaves much room for implementation due to many floating variables such as schedule, experience and talent of his players, and rules and time allowed for practice, the program is one that will encourage and enhance the explosion and flexibility of his players for the upcoming season.

The program is very much plyometric-heavy, and will hopefully offer a foundation for his athletes that many high school coaches fail to develop in there players. A foundation that prepares their bodies for the sport-specific responsibilities rather than forcing a memorization of sport-related movements.

Based upon his implementation, and the feedback of the program, hopefully, this will be something of opportunity for the future.