February 19, 2011
For the past few years, the NBA Dunk Contest (Forgive me if I failed to mention trusty sponsor Sprite) has become an event that many felt was on the way out. There were many debates that the contest needed an overhaul, needed superstar power, or flat out needed to be done away with – as everything that could have been done, had been done. This year, the inclusion of “dunk coaches” and some real talent with Blake Griffin, DeMarr DeRozan, JaVale McGee, and Serge Ibaka, the contest was bound to rebound to the entertaining spectacle that its always been. And it was. In fact, let’s be honest, the entire weekend was, as no other league or sport does an All-Star game or celebrates the game’s best players the way the NBA does. David Stern get’s it.

Nonetheless, while Blake Griffin walked away with the title (despite an obvious bias), there are two dunks that left my jaw on the floor. The first, was performed my pick to win the entire thing (and hopeful to be a New York Knick) in JaVale McGee, who dunked two balls into side-by-side backboards/rims. The other, was a dunk that had me complaining the entire night at the mercy of my tag-team partners  as the biggest travesty in the history of the competition. Serge Ibaka’s free throw line dunk, in which he took off beyond the line, and received a 45. A travesty! Anyhow, the DP appreciates awesomeness, and with such being displayed in those two dunks, we brought it here to the DP for your, and my pleasure. Enjoy. 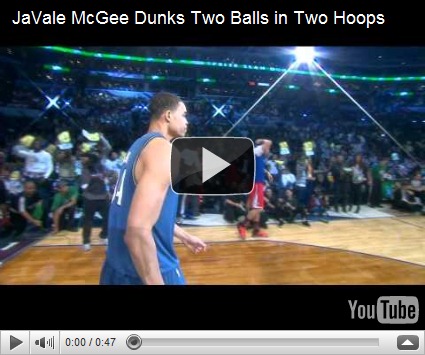 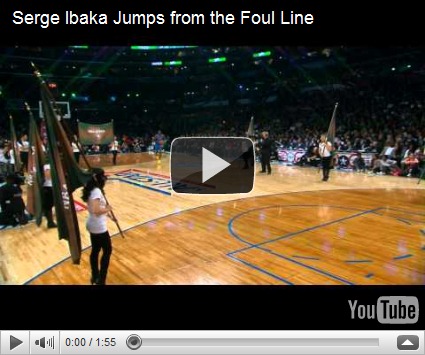