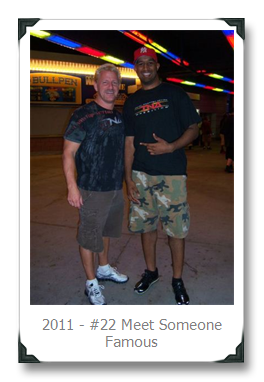 There I was standing in a urinal, doing the diligence and requirement set by the human body, when I looked to my right and there was Jeff Jarrett, Founder of TNA Wrestling, doing the same exact thing two urinals down.

It wasn’t exactly the way I anticipated “meeting someone famous”, as if something of such stature can be predicted and happen on the whim, by such sheer will and/or demand. However, after another amazing show put on by TNA Wrestling at MCU Park in Coney Island, my tag-team partner (very ironic using that term when actually referring to wrestling) sat in the stands just relaxing as about 85 percent of the 6,500 fans in attendance stood in line to get a picture with Kurt Angle in the ring.

After deciding we had enough people watching for the night, we headed for the exits, but not before yours truly felt the two bottles of water and 20oz Gatorade consumed before and during the event weighing on my bladder. As I walked in to the restroom, I headed straight for a urinal. As I stood, I noticed the guy on my right texting on his phone, and after an odd double-take at another man at his urinal, I realized it was indeed Jeff Jarrett.

Nah, I hate when chatty guys engage in conversation with me at urinals. I won't be that guy.

And while I debated this with myself, Double J, walked away.

I figured, well, it was still a good story. Very weird, but still interesting.

I peed next to Jeff Jarrett. Ha! Go figure.

However, as I turned around to wash my hands, there he was washing his hands as well.

After laughing, Jarrett stated, “I hear ya, I was out there, and figured I had to take a few minutes to go”

After washing our hands, we walked over to the dryer where we engaged in further small talk.

“Where are you from? Right here in Brooklyn?”

“Nope, been to quite a few actually”

“How long you been a fan”

“The very beginning. First show in the Asylum in Nashville. Been hooked ever since”

We then decided to engage in further small talk, including a small chat on wrestling, which any wrestling fan would be able to tell you, is amazing.

After leaving the rest room, I did in fact extend a thank you for all of his hard work, which very much included developing the company and brand that is Total Nonstop Action Wrestling. He acknowledged, and thanked me for supporting the brand.

After coming out of the bathroom, he obliged to a photo request (his only one of the night, to the extent of defying his personal security orders), and even engaged in conversation with my tag-team partner, joking with her that I followed him into the bathroom.

My only regret? Not asking him when a pay-per-view will be coming to New York City.

As meeting Jeff Jarrett is an experience I surely wouldn’t mind having again.

And even though it doesn’t happen again, the first time will always be weird, but very, very, memorable.