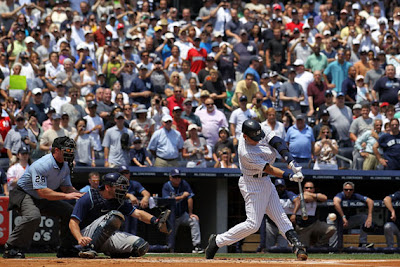 What is there to say? This was a moment every Yankee fan anticipated and expected for a long time, yet, it still seems like such a shock. 3,000 hits. Wow. And of course, reaching the milestone in classic Derek Jeter style, going 5 for 5, and capturing the historic hit in grand fashion, with a storybook, unexpected, home run to left field.

As the cliche goes, which has become too common, it is rightfully used again here, "you could not have scripted this any better".

Yet it's a script that is all too well known by Yankee fans.

A script,that many others can draw similar conclusions to, is parallel to my life.

He is this generation's version of Gehrig, Mantle, DiMaggio, and Berra.

He is the guy  as a young boy that I saw take over for an injured Tony Fernandez in early 1996, and hoping this touted rookie was not just another Kevin Maas.

He is the guy whose t-shirt-jersey I bought right after the 1996 Championship season and wore it twice a week, uncluding everyday in gym class in the 6th grade.

He is the guy we all pretended to be while performing our version of "The Flip" play in the street.

He is the guy, we wish we all were in High School. Cool. Good looking. And yes, even Miss Universe on the right arm.

He is the guy you went to bat for during the college years. Defending him in many arguments in disbelief that there are those that don't believe in the aura of Derek Jeter. "Overrated?" What?!

He is the guy, as you become a young adult, and you begin to see his numbers and range decline, you realize not that the Yankees need to find a new place to put him in the field or the order, but that he did it all the right way - clean.

He is the guy that year after year seemed to handle himself here in New York City as if pressure were a fictitious creation.

He is the guy, luckily, alongside another favorite in Mariano Rivera, in which I had the distinct pleasure of watching each and every day.


Quite frankly, over the past 16 years, he is simply, the guy. The Captain. Our Captain.

As the journey and memories over the past 16 years is the true celebration of this milestone and achievement.