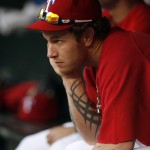 It seems as of late, the issue of death, more so, tragedy, has been thrown onto our everyday plate of social and societal digestion. Whether it be the local news with cases of murder and manslaughter, or the situation of accidental and sorrow-filled, we have and are becoming desensitized to the issue.

On the heels of the Casey Anthony verdict, and several stories of other children across the country being killed by there parents or other loved ones, the issue of death and tragedy is now becoming almost too much for the listener to bear. Too much to understand. Too much, to wonder the proverbial question of why. And now, so much, we are numb.

With so many cases of children being tortured, molested, trafficked, or outright killed, we’ve slowly begun lack a true sense of feeling for the children, and a growing outrage for the type of parents, excuse me, the type of people we are living amongst on this earth. One has to ask themselves, when did the world become this wicked? When did the unconditional love for the innocence and curiosity of a child become dried up?


Like many, I too became hardened to the topic, almost to the point of accepting the very extreme, but somewhat seemingly true at times, argument that maybe this is part of the new world. Parenting and love just isn’t what it used to be.

Heck, one could make the claim, which is not so extreme, that our society doesn’t value life anymore.
However, after hearing about the death of Shannon Stone, the firefighter who lost his life attempting to catch a foul ball for his son, my heart sank. And that raw emotional feeling, returned.

The story, is probably the most emotional of 2011. More so than many of the other stories of year.

Why? Simply because of these elements.
It’s a story that the media will soon forget,  moving on to the next racy, controversial, or hot-button topic. However, the thought of what might be running through that child’s head -  even right now – makes heart go out to him. It makes me feel for him. It makes me pray for him.
And during a time when the stories surrounding us are so heinous, graphic, and senseless, it’s a story of a father who died with an unconditional love for his son, is the one that makes us feel again.