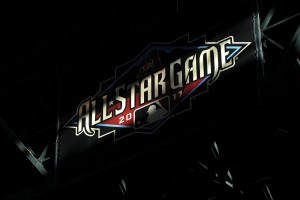 For the second straight year, Major League Baseball's All-Star Game has seen a dip in ratings. In fact, the 2011 edition of the Mid-Summer Classic was the lowest rated game of all-time. Not exactly what Bud Selig and baseball executives want to hear, especially, since, you know, the game decides home field advantage.

However, as baseball moves forward to their own Collective Bargaining Agreement negotiations (aren't we all tired of hearing such phrases?), the league is now seriously looking into shaking up the game in various ways, whether it be division realignment, expanded playoffs, tinkering with the availability of the designated hitter, or added usage of instant replay.

And while I have touched on in this topic in the past (Baseball's Future, A Great Fear?), I truly believe the game is in need of slight adjustments seen in the other leagues in North America. Changes that can capture a new generation moving forward.
And while the All-Star Game lacked the majority of baseball's superstars who were either replaced due to injury or  did not attend by choice, it was not the main reason for an overall lack of interest in the game.


For starters, the first pitch thrown nearly at 9 o' clock does not help. Now, yes, we all understand the sports business world, and most importantly, the role television has in dictating that world. However, the job Fox did in presenting the All-Star Game was poor. Not poor in the sense of it's overall coverage of the game, but in it's presentation.

A 9:00pm first pitch after an hour of advertisements and movie trailers with a few segments thrown in saying very little about the All-Stars themselves is not a great way to start. By the first pitch, most viewers, like I did, probably felt alienated and disconnected from what should have been special anticipation.

Also, what was with Fox playing the NFL on Fox theme throughout the night? I understand that the NFL is king in this country, but no need to subliminally keep us in football mode during the lockout. Come Fall, we'll be ready.

Nonetheless, after throwing some blame on Fox, the remainder on the responsibility belongs to MLB. For the past few years, baseball fans have been clamoring the league to market their stars. Hey, Mr. Selig, MARKET YOUR STARS! Baseball has so much talent, yet, the casual fan would never know who they are. A clear example is Johnny Venters. A young hard throwing reliever who is one of baseball's best talents. However, for most, last night probably evoked several thoughts of, "Who is this guy, and why is he an all-star?"
From Prince Fielder, Roy Halladay, Jose Bautista, Robinson Cano, Troy Tulowitzki, Matt Holiday, and Matt Kemp, baseball had enough talent and potential star power to make the All-Star Game special.

And how can I forget, Brian Wilson. How MLB has not yet gotten behind this guy is unbelievable. The guy is entertaining every time he is on camera - on-the-field, and off.

As Selig and his cabinet of baseball minds look towards baseball's future, revamping the All-Star Game should definitely be on their list. Selig should definetely sit down with David Stern of the NBA, and take notes. While the actual game isn't much, the weekend is an event and celebration that you just cannot miss. The NBA makes it feel that way, and TNT does an even better job of letting you in on the personalities of the All-Stars.

Hey about shifting to an All-Star Weekend format? Just a thought.

In all honesty, the best event that occurred during the All-Star break was indeed the Future's Game.  Very ironic for a sport focused on its past. Seeing tomorrow's stars play hard, showing off their individual talents, and having ESPN introduce them and making them a household name by the end of the event, had a feeling the All-Star Game lacked.

It's about entertainment, period.

And while I understand baseball's undying grasp to remain conservative and traditional, adapting to the times does not mean completely relinquishing your historic roots.

MLB needs to understand that. And for the sake of the game moving forward, hopefully, sooner than later.